The London Fog is available as a limited edition of 888 pens total, across their fountain pen and rollerball.

Like previous Homo Sapiens limited editions, the London Fog arrives in a stunning “piano black” clamshell wooden box, with Visconti’s signature logo on the top. Opening the exquisite packaging reveals the pen in a flush tray, perfectly sized to hold the pen. Like in the past, this packaging exudes quality, elegance, and beauty. Removing the thick tray with the pull handles on either sides reveals a standard care booklet as well as a limited edition certificate card. 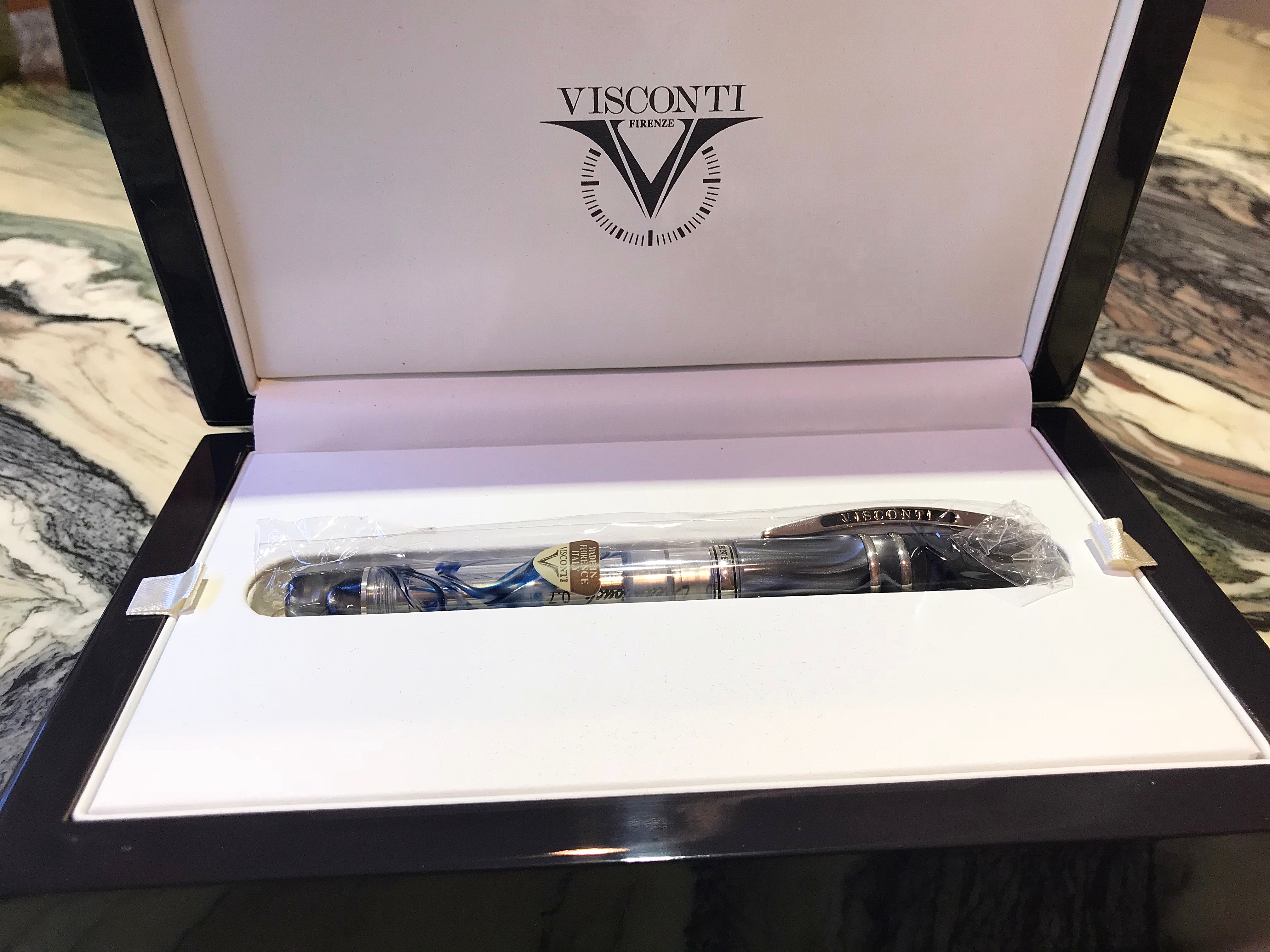 Like their previous limited editions, Visconti is using their “acryloid” material, an interesting mix of acrylic and celluloid. Their material and process gives each pen a unique swirl pattern, where no two pens are identical. 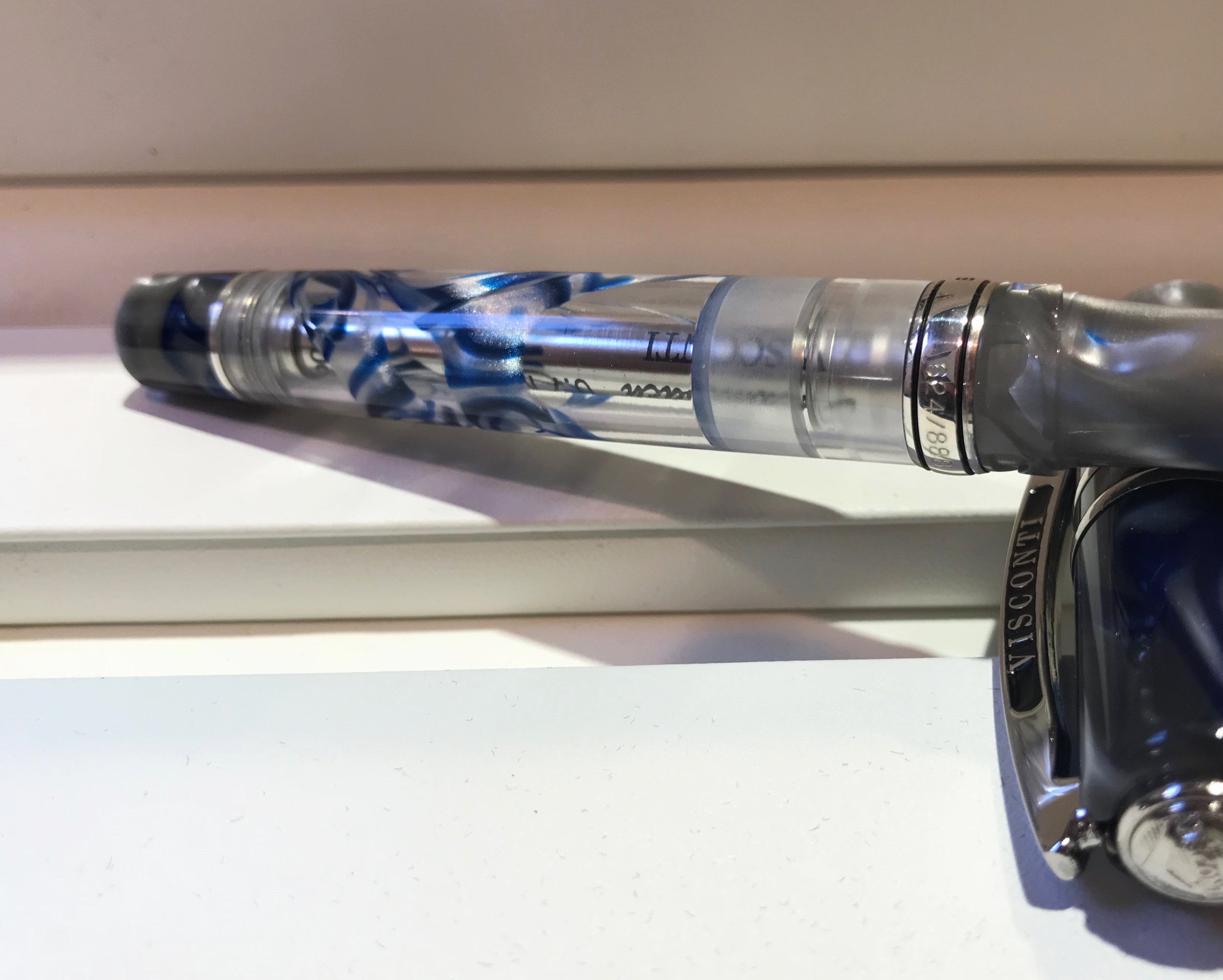 For this pen, I opted for their rollerball version, as opposed to the fountain pen for convenience. Like their fountain pen, the pen’s cap locks in with a series of grooves and hooks, which seal the pen with less than an eight turn. For a visualization, imagine one of those child-proof prescription pill bottles where the lid needs to be pushed down a little before being twisted. The cap on this pen behaves in a very similar manner, where a slight bit of downwards pressure and a small twist releases the cap.

Where their fountain pen uses their “double reservoir power filler” (as seen in the Crystal), the rollerball opts for a universal rollerball cartridge. This makes getting replacements a reasonably simple exercise with many options to choose from, such as Monteverde, Schmidt, and others… Out of the box, Visconti includes their standard blue cartridge, which can be switched by unscrewing the top of the pen and simply pulling it out.

In addition to the acryloid on most of the pen, it features brilliantly polished sterling silver accents, along the barrel ring, tip section, and cap clip. These give the London Fog an aura of value and extravagance, similar to those found on their other limited editions. 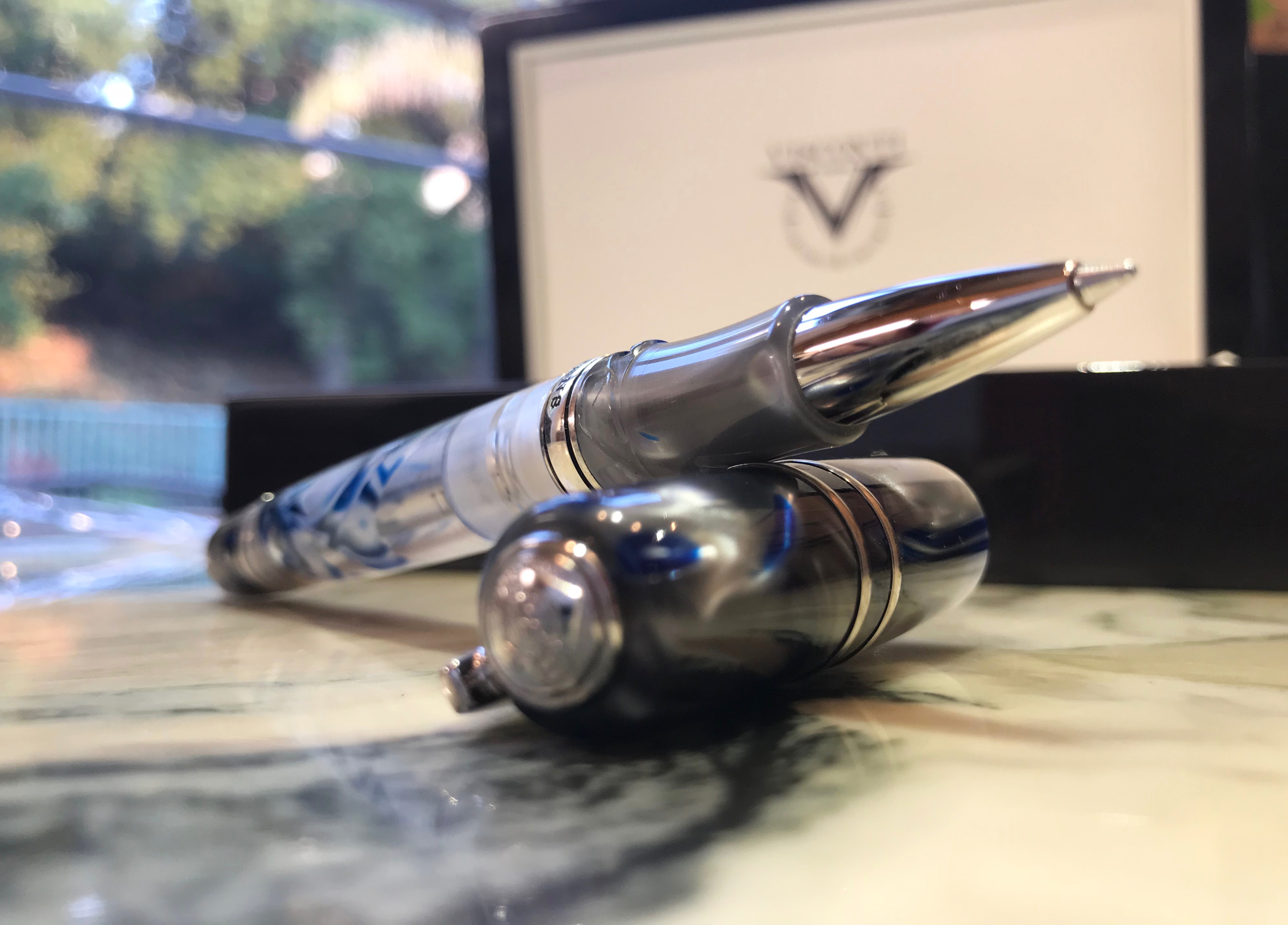 The top of the cap features Visconti’s “MyPen” system, where original Visconti emblem can be removed by a magnet, and replaced with any one of their MyPen tops, which can include initials, logos, and even natural gemstones. These are not included with the pen and generally have to be purchased separately at an authorized Visconti reseller. 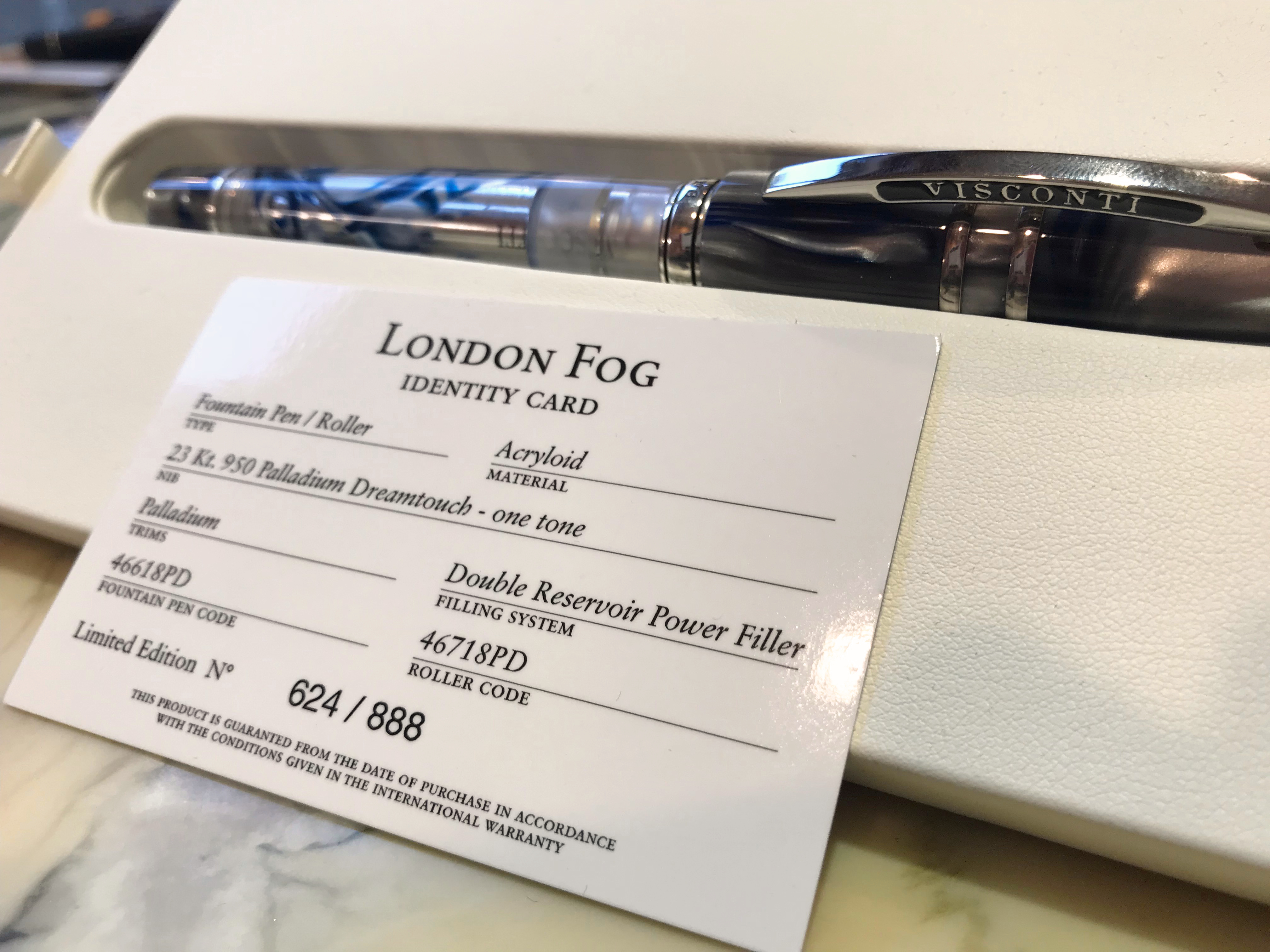 The measurements on the pen mimic those on the other L.E.’s, coming in at 5.75” (14.5cm) capped and 6.75” (17cm) posted. The rollerball, as expected, comes in a tad lighter than the fountain pen version, as there is no mechanism. Unposted, the pen is nicely balanced in my slightly-above-average sized hands. Once posted though, the pen becomes quite back-heavy due to the sterling silver clip. 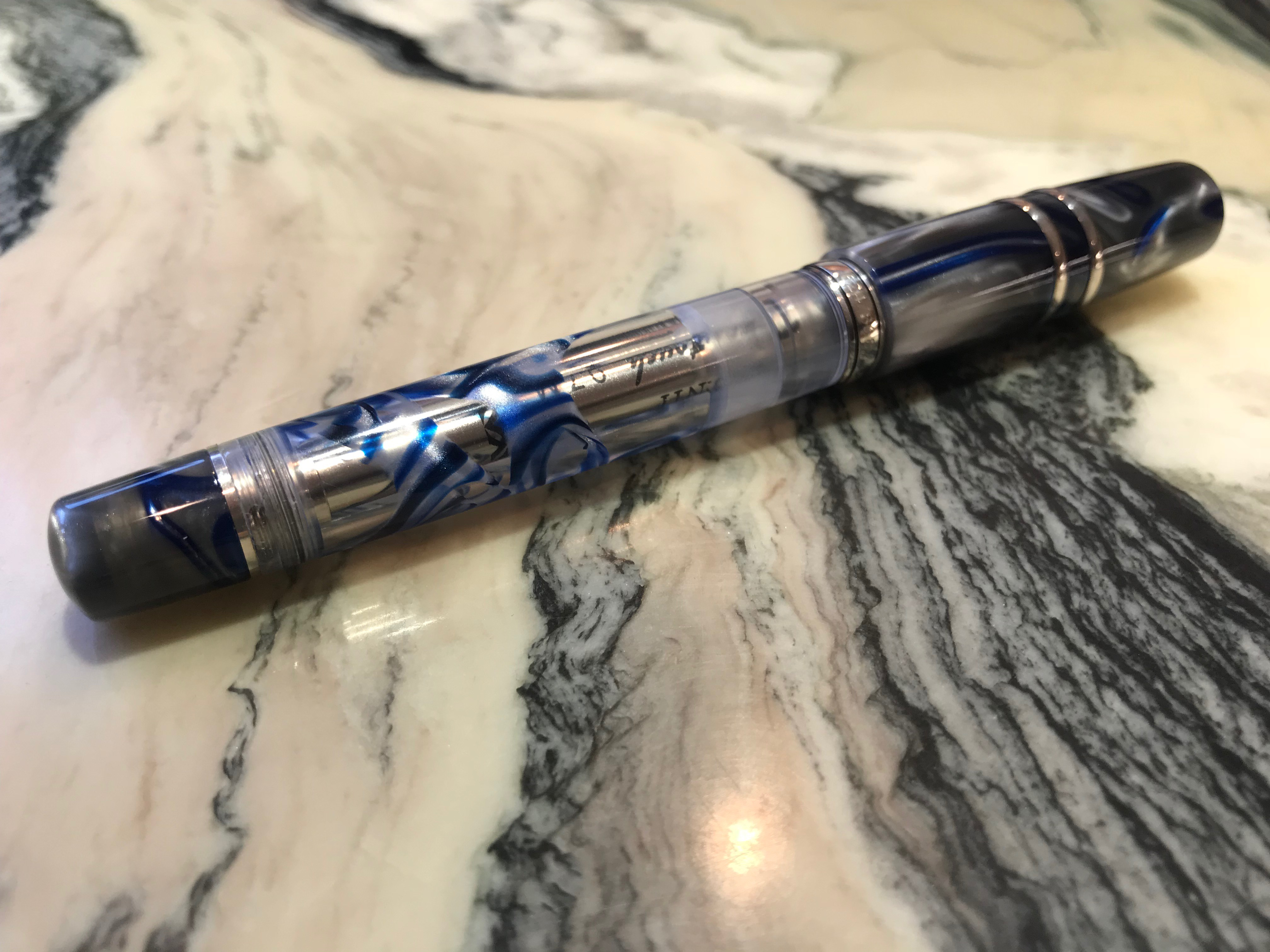 The MSRP of the rollerball version of this pen is $895 USD and $995 USD for the fountain pen version. I picked this pen up at PenChatlet, though they are currently out of stock. PenChalet is a great seller for all things inks and pens, and I would definitely recommend them if you are looking for anything pen related!