Noodler's General of the Armies Review

General Sheridan was a Union general in the Western theatre of the U.S. Civil War and was closely associated with Ulysses S. Grant, the General-in-chief at the time. General Sheridan gave the approval for the Armies of the West to officially change their uniforms from green to blue in the middle of the war. This fact is what inspired Noodler’s to create this color-changing ink. 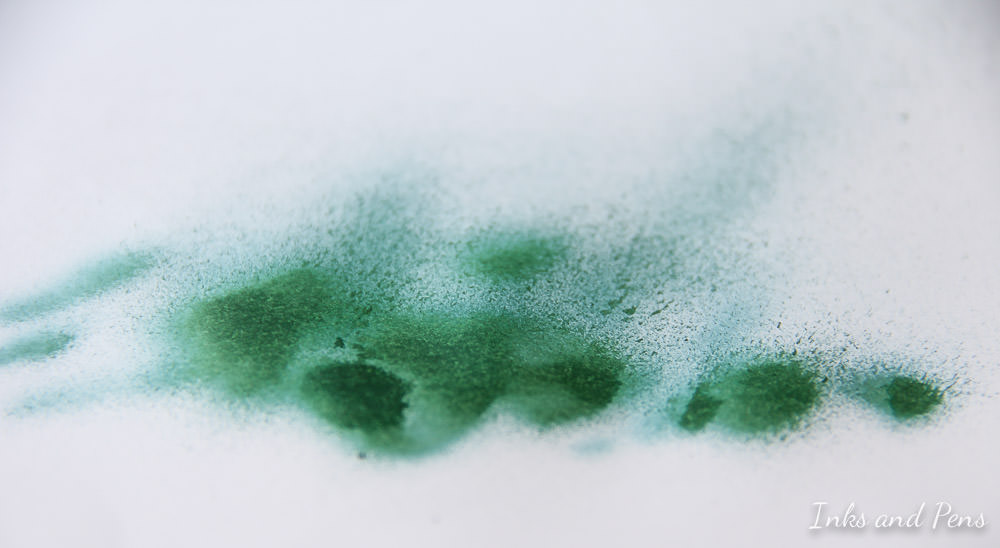 The ink comes in a typical Noodler’s bottle and arrives in a cardboard box. The box is printed with the typical “catfish” symbol of Noodler’s. 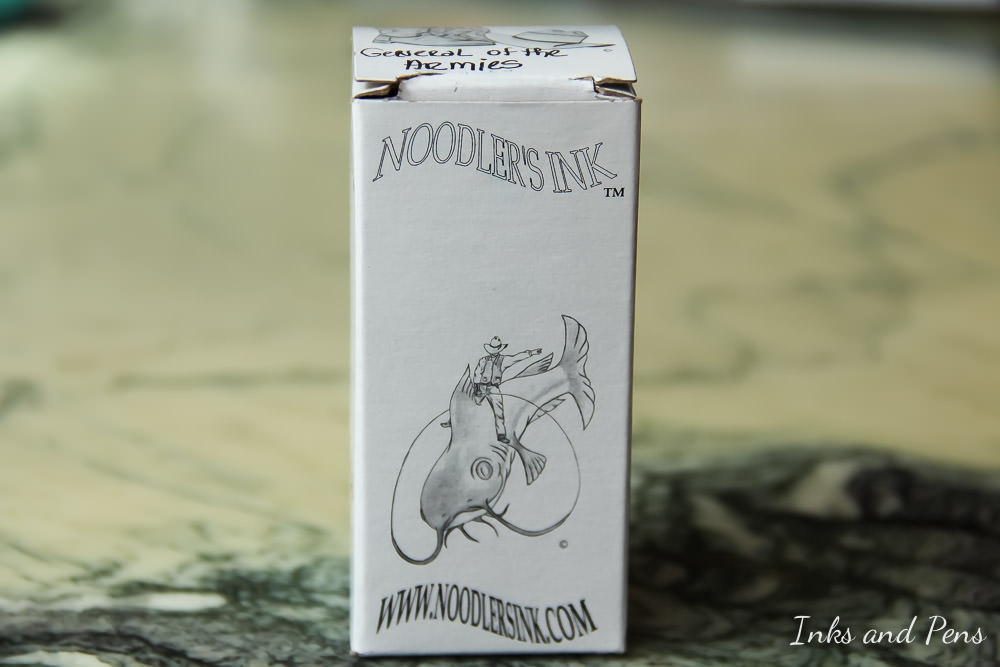 The label for this ink wraps around three sides of the bottle and features artwork/pictures of various Civil War events. The ink looks a very alien-like green in the bottle. 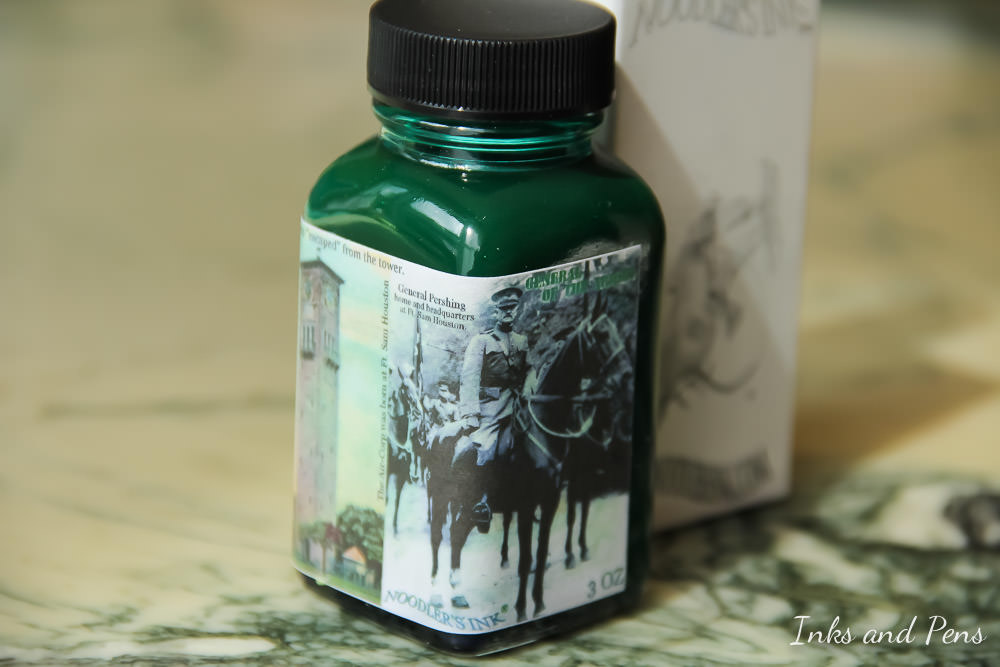 The left side of the label features a large picture of General Eisenhower, who shared the same home-town as General Sheridan. Another thing to note about this ink is that after some time to settle, a good amount of thick blue dye is present on the bottom of the bottle. A vigorous amount of shaking certainly distributes this dye around. I would recommend shaking the bottle every time you fill.

Here is a swab of the ink. You can see it is a muted green or a blue, depending on time and how wet the swab is. In general, the more wet a pen or swab is, the longer it will take to change from green to blue. The color change effect is much faster on a drier pen or a pen with a finer nib. 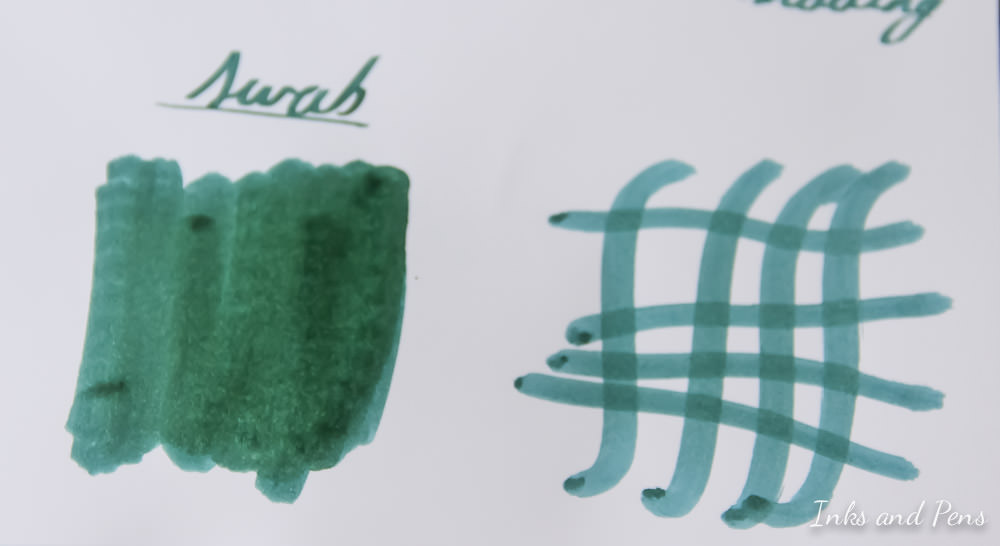 Here’s the preview of the ink. This picture was taken about 10 minute after writing and the ink has mostly turned blue.

The review was done on HP 32lb Premium Choice Laser and a Pilot Parallel 1.5mm nib. I find that the thickness of the Pilot Parallel shows the color better than a simple medium or fine nib. The ink is very wet coming from the pen and it’s normally quite controlled. 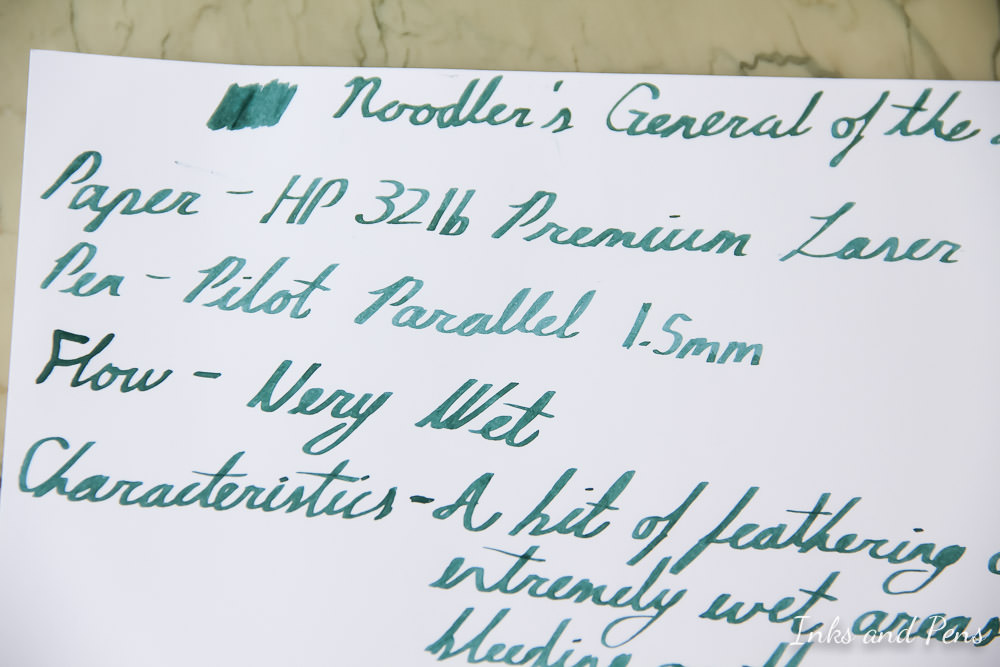 This ink is generally well behaved, but it does exhibit some feathering where the flow lost its control. Other than those few times, there was no feathering on this paper and a little on cheaper paper. There was only one spot of bleed through and that was at the same spot as the feathering. With a cheaper paper, bleed through is much more rampant. There is definitely a subtle and noticeable color change from a green to blue as time passes, but it does take some time. This picture was taken around 15 minutes after so you can see how far the color actually changed. 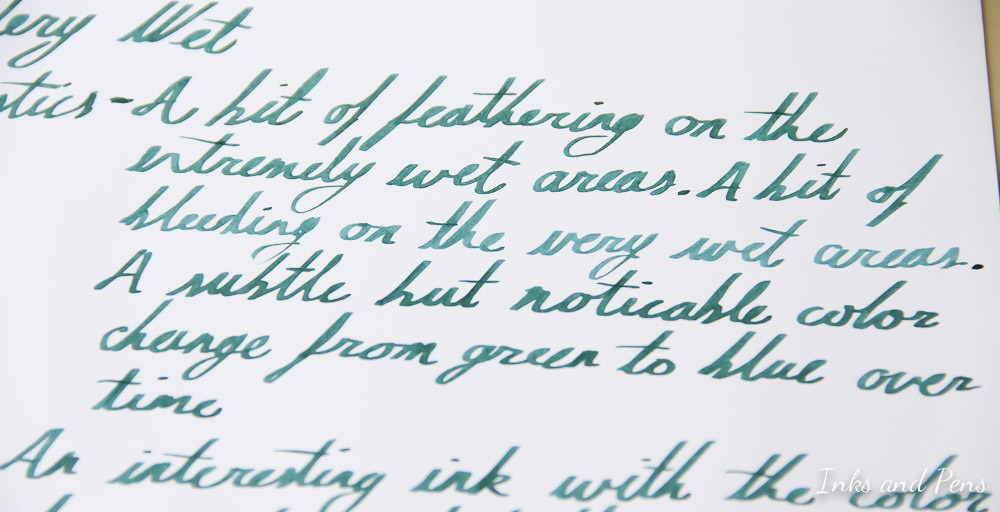 Personally, I find this to be a very interesting ink, even though I’m not too big a fan of the resulting color. The color seems a bit dull, but the color change sure makes up for it. Sadly, I have not seen any shading with this ink or any sheen. The ink dries extremely quickly at around 5 seconds, so I find it great for left-handed writers.

This ink is semi-bulletproof. The green portion of the ink washes cleanly off the page with water, leaving behind a dark gray-blue line. I found the line to be quite permanent and the semi-permanent feature can be used for tamper evidence. I would definitely be willing to sign documents or address envelopes with this ink. 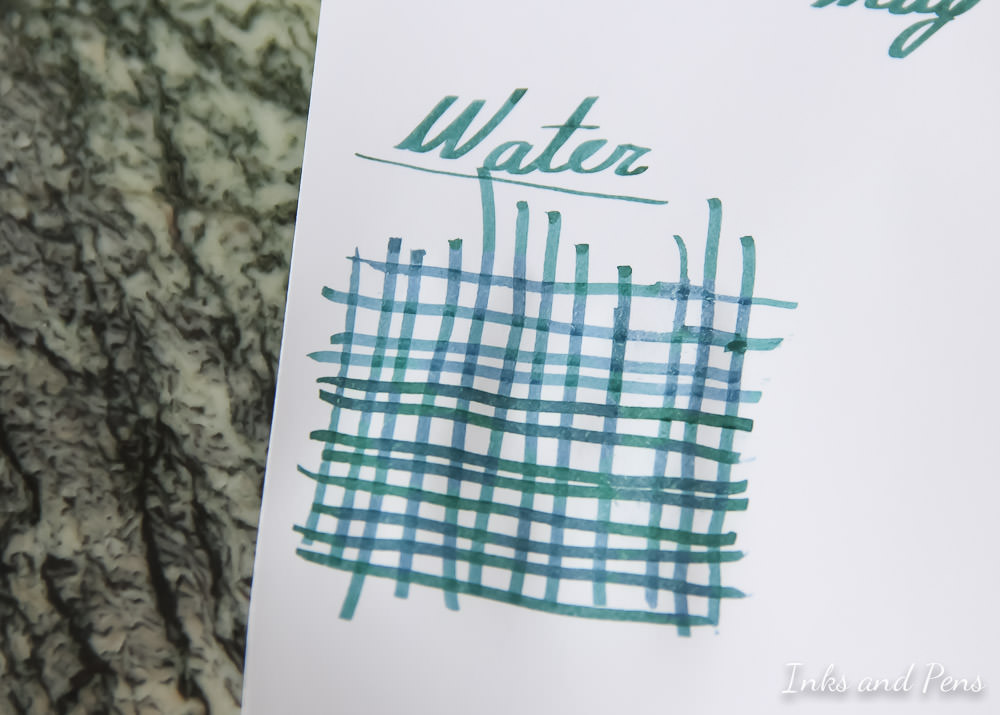 This ink can be found in 3oz. bottles from any pen retailers that carry Noodler’s ink. A 3oz. bottle has an MSRP of $12.95. 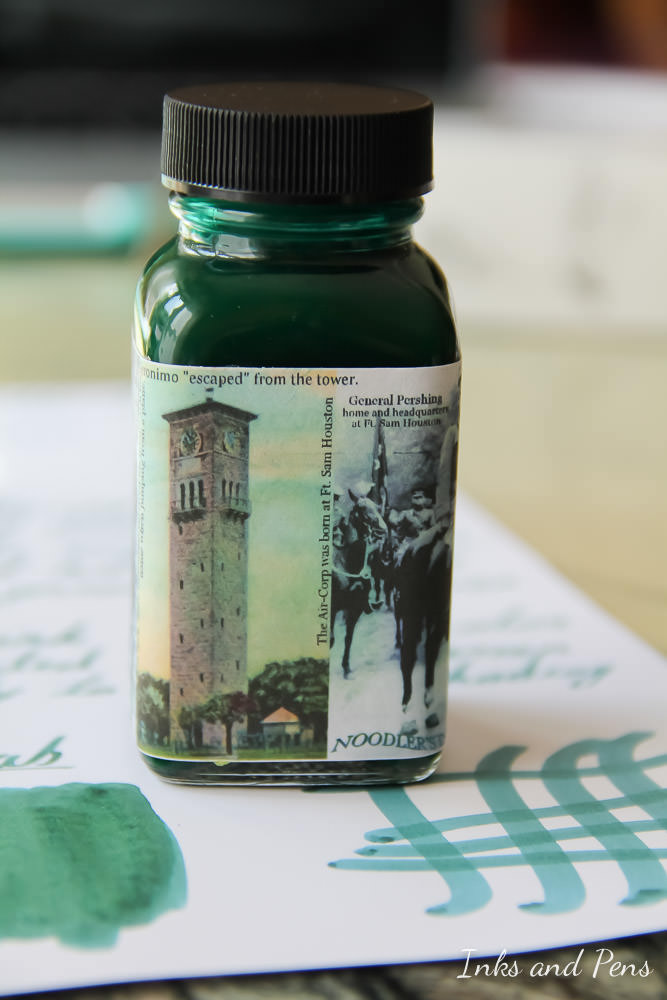 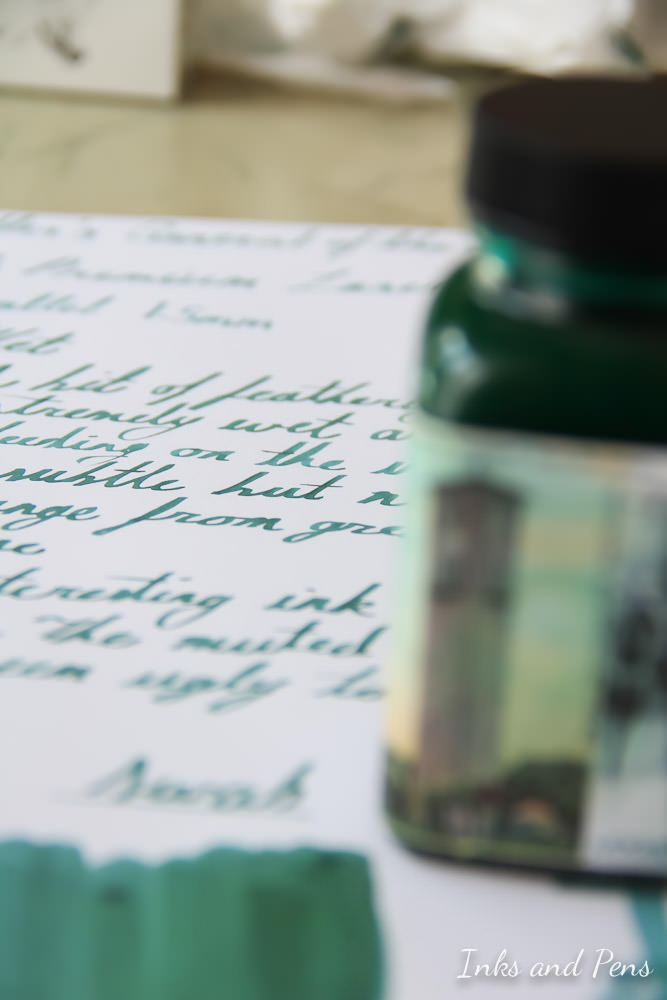 What do you guys think about this ink? Do you like the color? How do you feel about the color changing effect? Is it too “gimmicky?” Let me know down in the comments! I love hearing from you guys!