Some of you may have heard of the Chinese pen manufacturer called Jinhao. They are based in the port city of Shanghai, China and specialize in making all kinds of writing instruments, from fountain pens to ballpoints. Their pens can be found very inexpensively from places like Goulet Pens and if you want to take a risk, eBay.

Many people give Jinhao a bad rap for quality control issues and very bad nibs. However, almost every Jinhao pen that I’ve bought has come with pretty smooth nibs, which needed very little work. I personally think the X450 pen makes a super great workhorse pen for very little money. If you absolutely don’t like the included nib, you can swap it out for a Goulet #6 nib for $15, or even a Franklin-Christoph nib.

The pen is made of what appears to be solid brass and has quite a good heft to it. The pen is well balanced unposted, and becomes a bit top-heavy once posted. The center of gravity unposted is right in the middle of a fully inked pen, and about 2.5 inches from the back when posted. The pen isn’t excessively huge and is fine for people with medium and large hands. The pen can fit into a standard pocket, but is by no means a pocket pen. 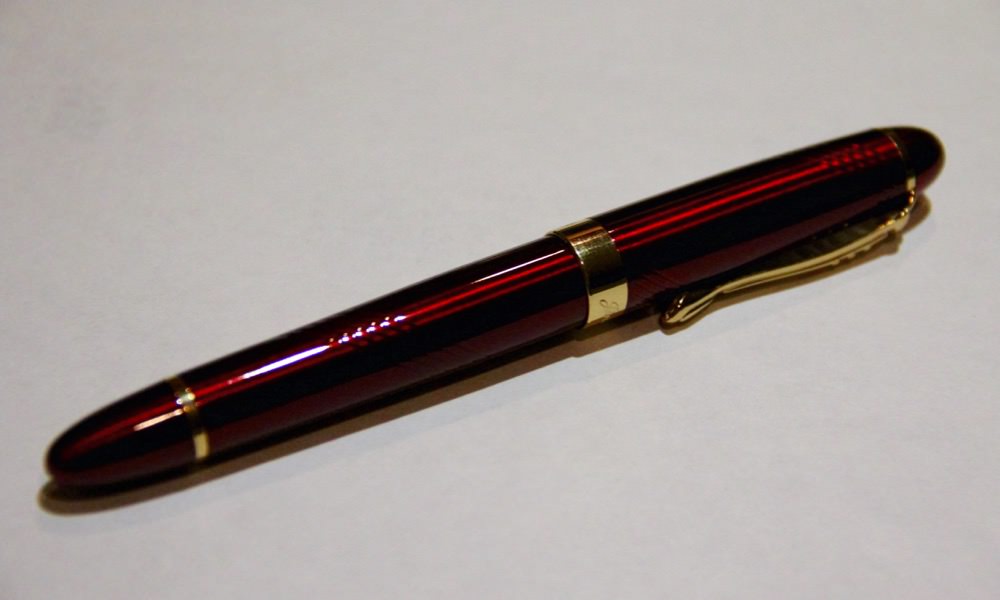 The X450 comes in a huge amount of colors, ranging from an understated stainless steel finish (not actual steel) to a brown marblesque finish (as shown in the first picture on the top.) So far, I have the following colors: Lava Red, Brown Marble, Red Twist, Black Marble, Dark Red, and Cracked Black. Some places may list out the names differently. 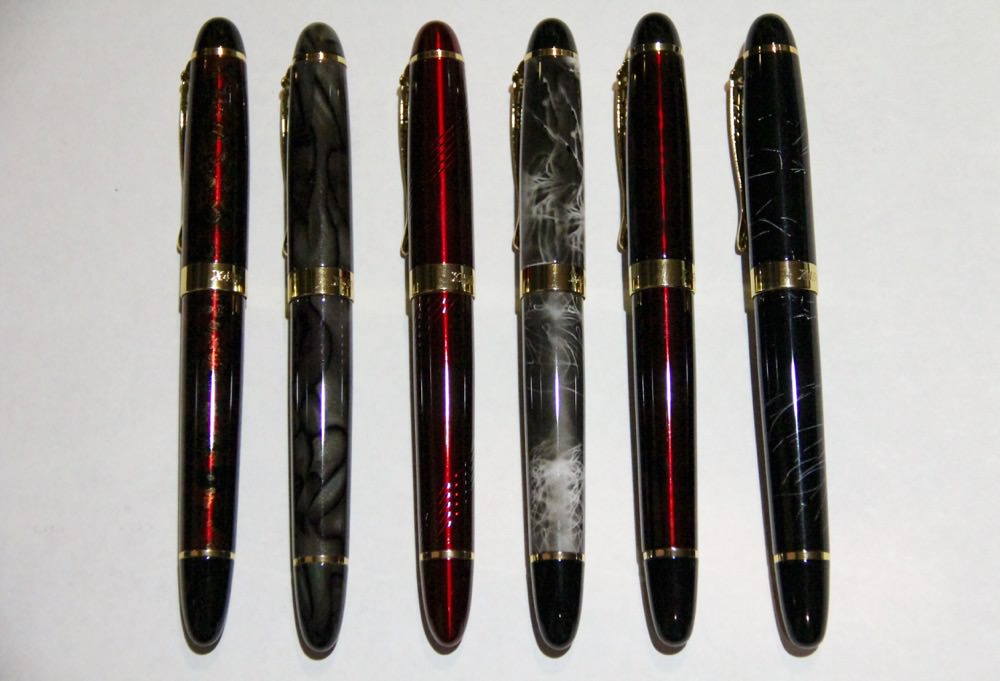 Like I said before, the X450’s come with a easily swappable #6 nib and feed. The nib and feed are friction fit into the section and put straight out with some force. The first time may be a bit tricky, so you should try twisting the nib while pulling. Subsequent times get much easier. Most standard #6 nibs, except Noodler’s (topic for another time), will fit fine in this pen and will write really well. The feed is also shared by a couple popular companies like Monteverde, Conklin, Hero, and others. 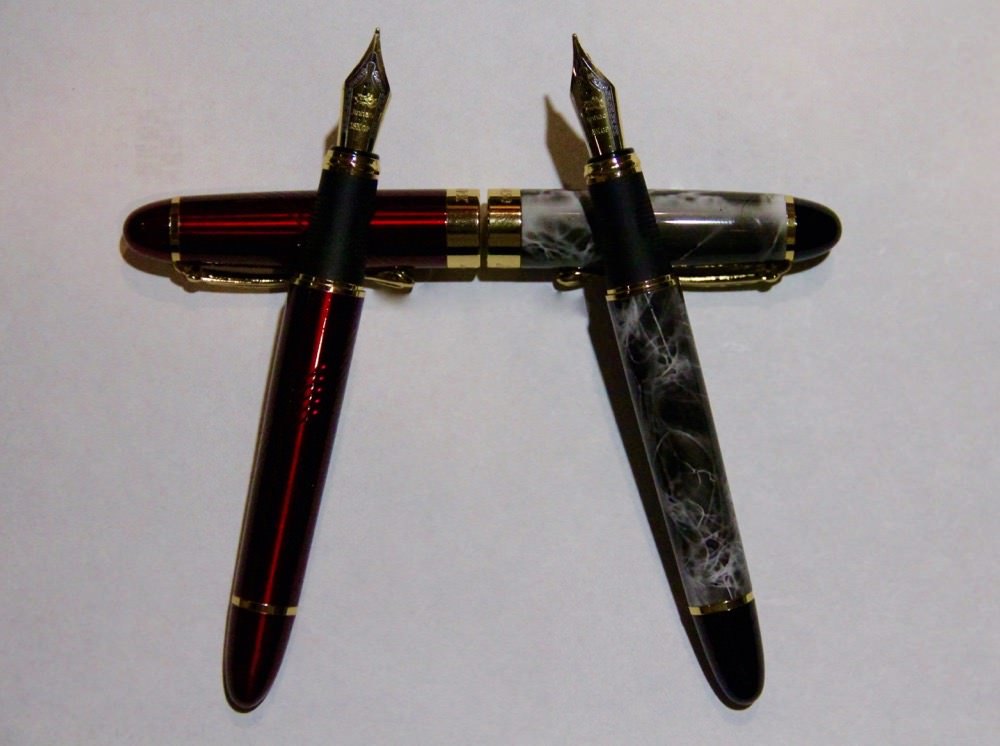 Now for a quick writing sample of the pen. The pen I am using for this is the Brown Marblesque finish with the stock medium nib that came with the pen. The nib came out of the box a bit dry but very smooth. A little adjustment made the nib quite amazing.

Yes, fake Jinhao pens DO exist! They are actually quite rampant on places like eBay. If you want to avoid such a problem, you may wish to order directly from a trusted retailer like Goulet Pens, but you will end up paying a steeper price. The same pen can be found on eBay for about $3-4 while it is $9 or so on Goulet. Thus, it is up to you whether you want to save some money, or you want more security in your purchase (and faster shipping times). Personally, I opted to buy all my Jinhao’s from eBay.

How to spotting fakes

First off, I would like to open a challenge. In the picture above of the 6 Jinhao pens together, which one is fake? There is exactly 1 that is fake in that lineup! See if you can guess it!

Anyways, back to spotting the fake! One of the most sure-fire ways to spot a fake is by taking a look at the nib of the pen. Authentic Jinhao nibs (on the X450, not X750) will have a decorative border in silver with everything else being gold. There should be the Jinhao logo directly under the breather hole (hole in the nib) followed closely by the word “Jinhao.” Under everything should be “18KGP,” even though the nib is confirmed to NOT be gold plated. The authentic nib should look like this. 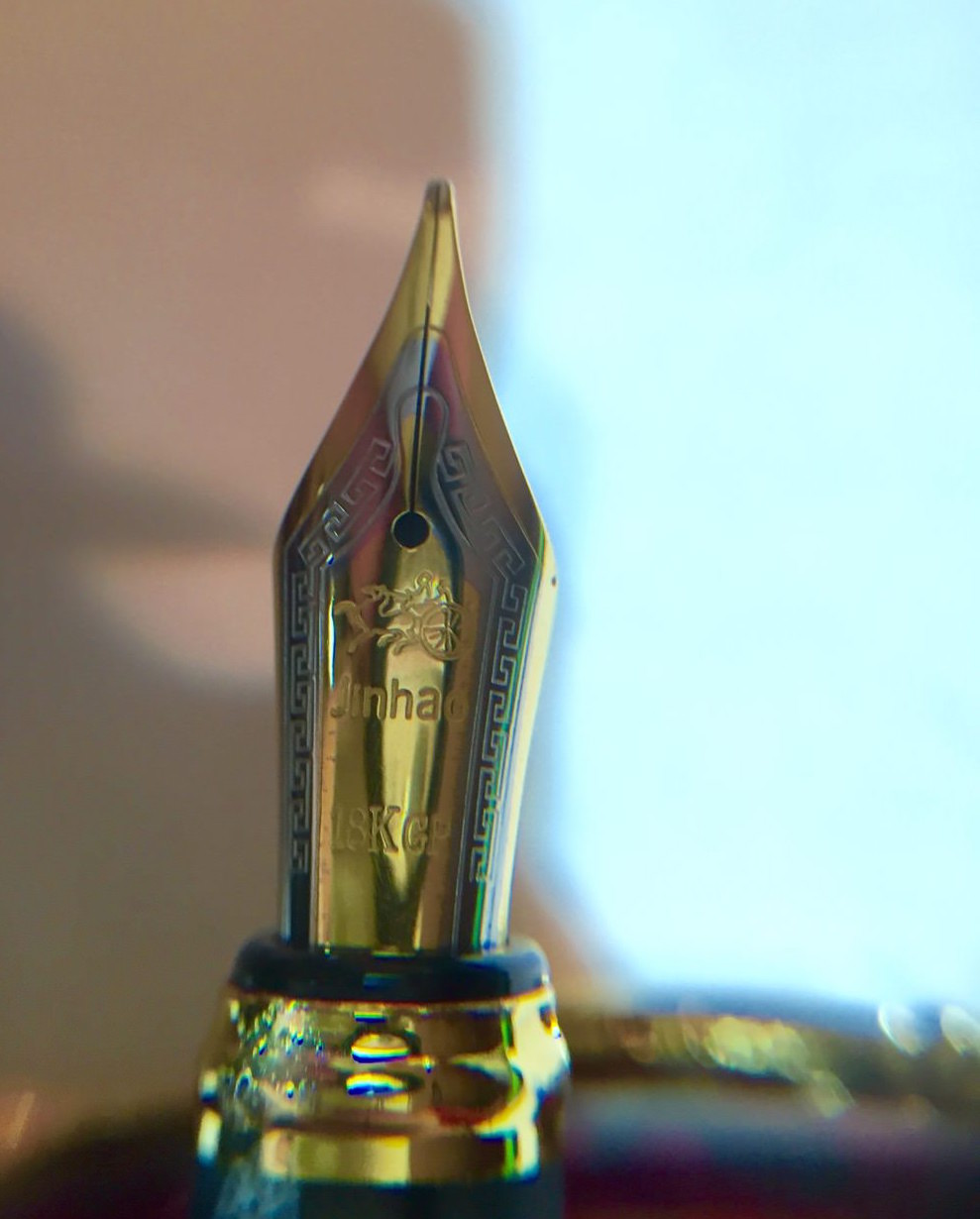 Now, a fake pen and nib will be missing one or all of those features. Also, now is the time to reveal which pen was fake! If you guessed the Cracked Black version, you are correct! I didn’t take a good look at the eBay listing before buying, and got a terribly fake one. Here is the nib of this one! Look how different it is from the authentic one above. 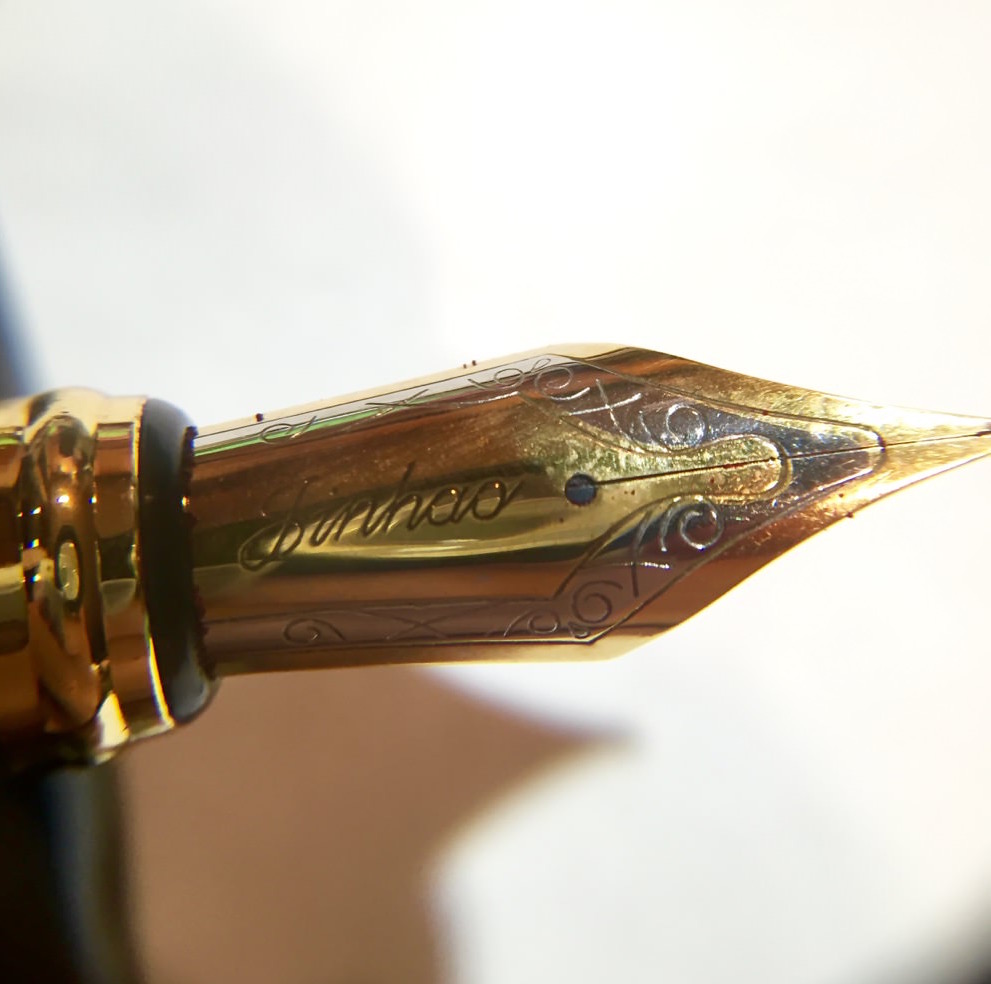 That is practically the easiest way to spot a fake Jinhao pen directly from the listings on eBay. I recommend going through the pictures and descriptions looking closely at the nib. If you just look at the barrel, it can be almost impossible to detect the fake pen.

Well, that’s all guys! Stay tuned for more to come!