The Italian pen maker recently paired up with another Italian company, Pininfarina, to design a unique pen with interesting technical characteristics and flair. Pininfarina is well known among car collectors for being the primary designer for Ferrari, Maserati, Ford, and Jaguar. Pininfarina also partnered with another pen(cil) company known as Napkin create the Napkin Forever Pininfarina.

The Visconti Pininfarina line is available in two colors (soon to be three): Carbongrafite (black) and Nanotech (silver). The Carbongrafite edition is made from unidirectional carbon graphite, the same material found in wooden pencils, except in a different form. This material has a very unique look and looks quite sleek if you ask me! The picture doesn’t really capture it, but the body looks like it has small ripples running throughout, much like a wood grain or similar. The pen is limited to only 930 pieces worldwide and can be found in either a fountain pen or a rollerball. 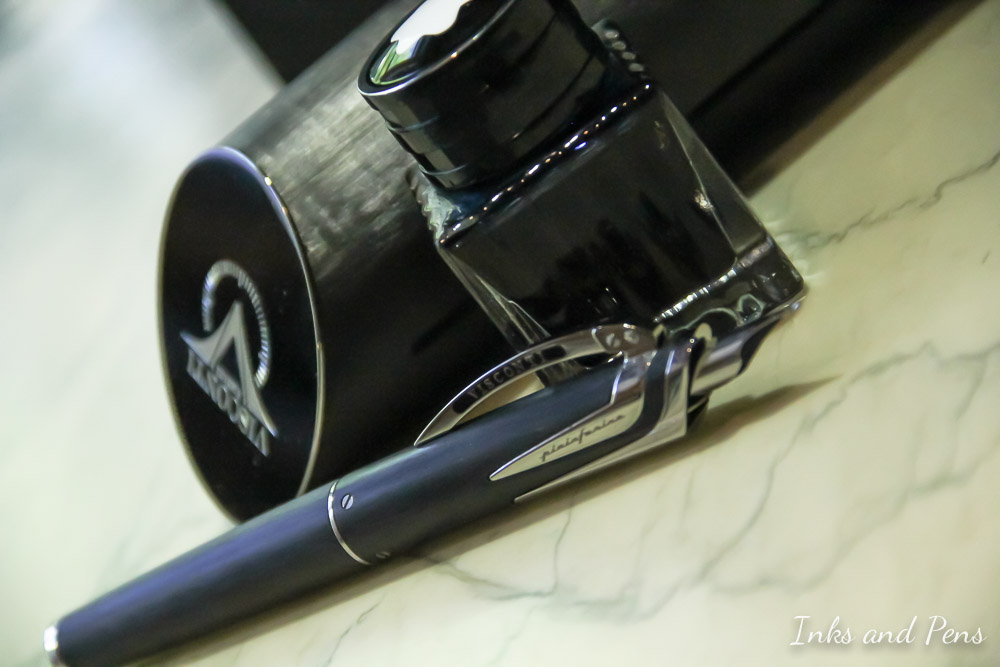 The pen comes packaged in a cardboard box designed to mimic the material of the actual pen body. It is embellished with the Visconti logo as well as the Pininfarina name. I do find this box to be quite cheap as it is flimsy and junky — definitely not the Visconti quality I’m used to. 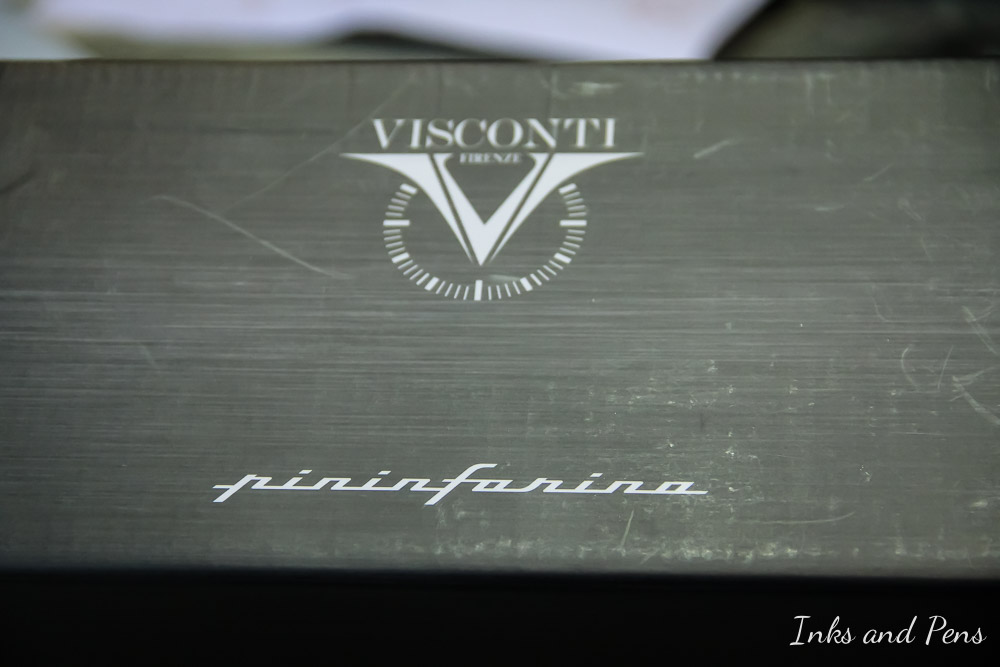 Opening the box, you are treated with an even worse site. The pen is practically packaged by a block of styrofoam. The styrofoam block is in two pieces, with the top holding a booklet about Visconti and Pininfarina as well as the warranty card. The bottom block holds the pen, a “mosquito” filler, and the pen’s display box. All of these components are literally just sitting in various cutouts in the foam. The packaging is honestly very cheap for this pen. 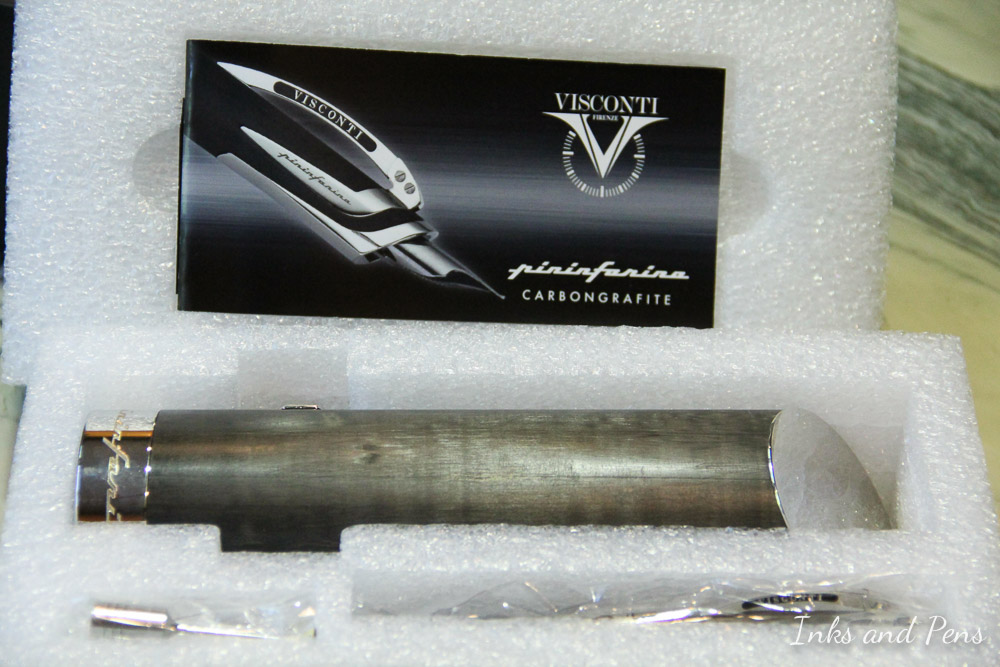 One of the pen’s most obvious features is its display case. The pen slots into a perfectly sized hole in the case which props the pen well above the table. This is great for “showing off” the pen to your friends or others. Once you are ready to store the pen, just slide the two metal pieces on the side down. The pen magically retreats back into the box and a slight touch closes the cap on the box. 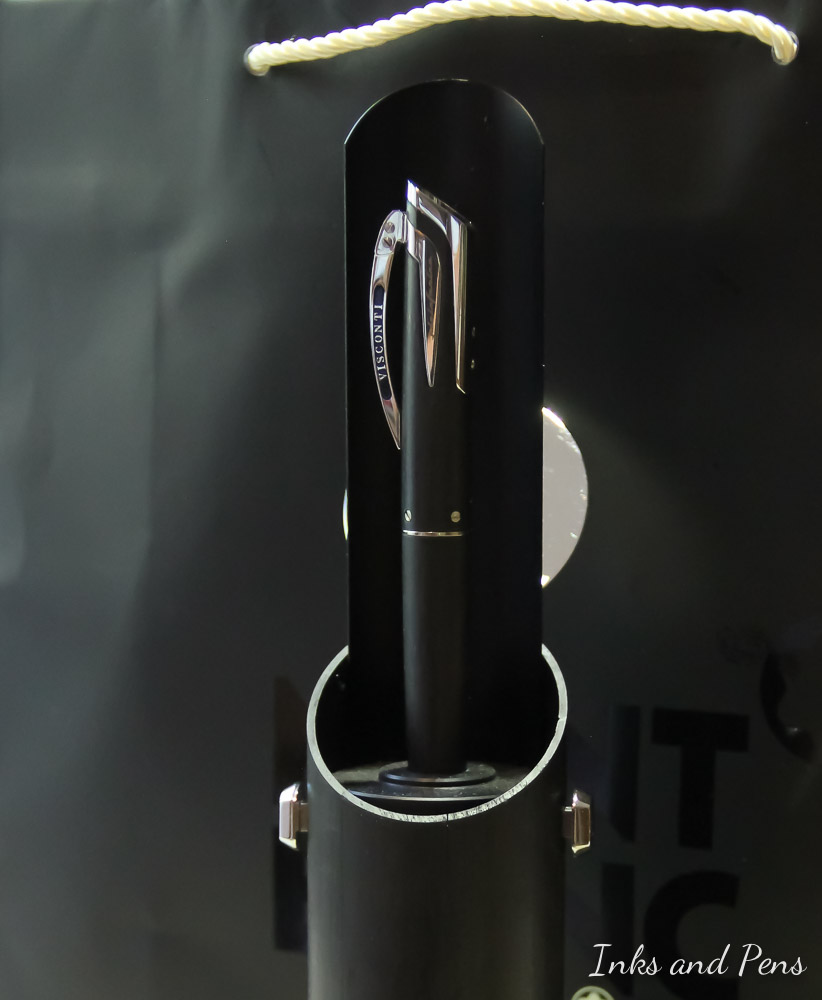 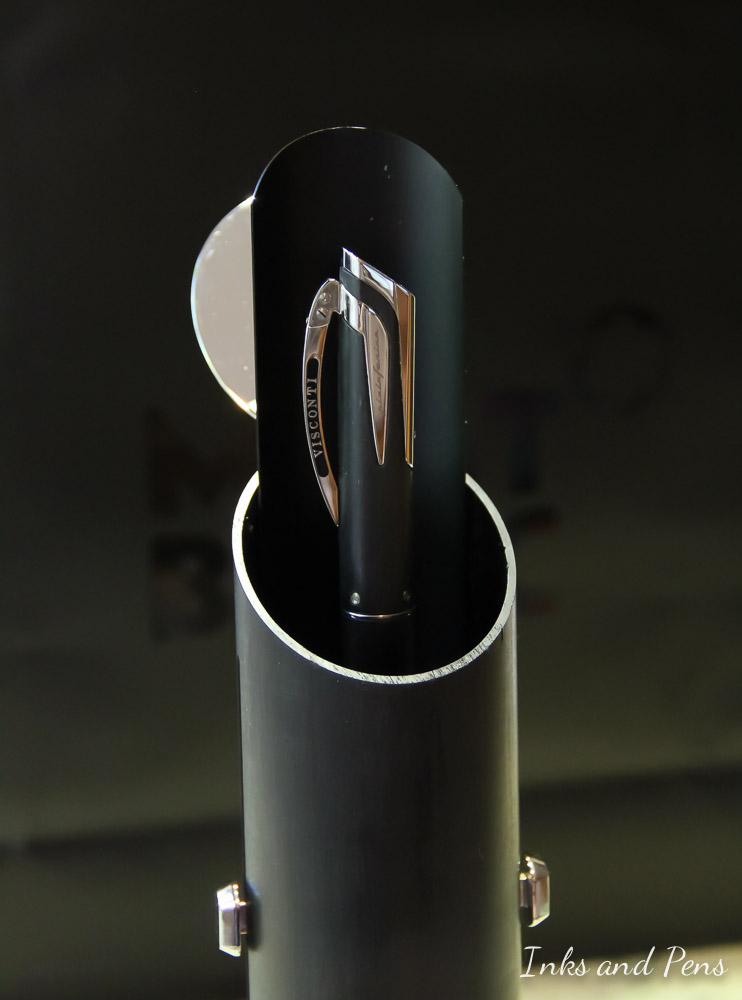 The key feature of the Pininfarina is the retractable nib. The pen features a unique rotating nib extraction mechanism along the back half of the pen. This effectively does away with caps and makes engaging the pen a very quick job. The only other fountain pens that I know do this are the Pilot Capless (Vanishing Point) and the Lamy Dialog 3. The Pilot Capless has a version that twists to engage with a knob in the back (Fermo), but it’s quite different from the Pininfarina. 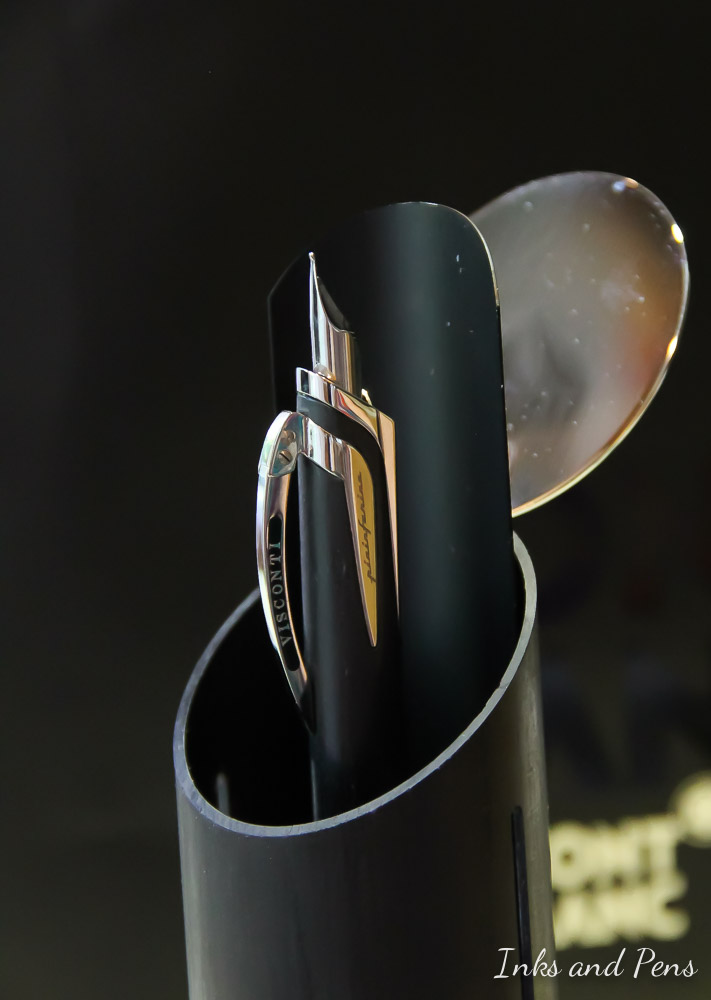 The pen seals up with a trap door very similar to that of the Vanish Point. When not in use (sealed), the trap door is closed to prevent the pen from drying up. When engaging, the trap door recedes allowing the nib to pop out. 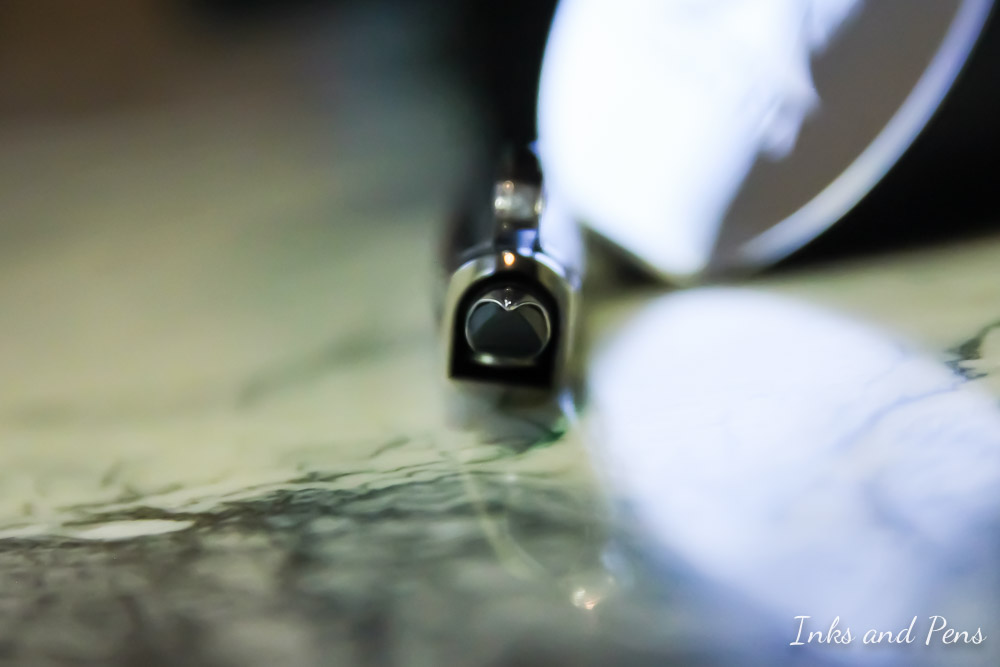 The nib on this pen is one of Visconti’s Chromium 18 Smarttouch tubular nib. ~~ As the name implies, this means the nib is made of Chromium.~~ Edit: A friendly forum user pointed out that Chromium 18 is just a marketing term for 18⁄8 or 18⁄10 stainless steel, an allow with 18% Chromium and 8% or 10% nickel. In essence, it is a steel nib. The good part about this nib design is that you do not actually have to fully submerge the nib when filling. This helps to prevent ink on the section and the resulting staining. However, unlike other Visconti tubular nibs, this one does not work with the normal mosquito filler. You won’t be able to fit it properly. Visconti includes a special one for this pen. 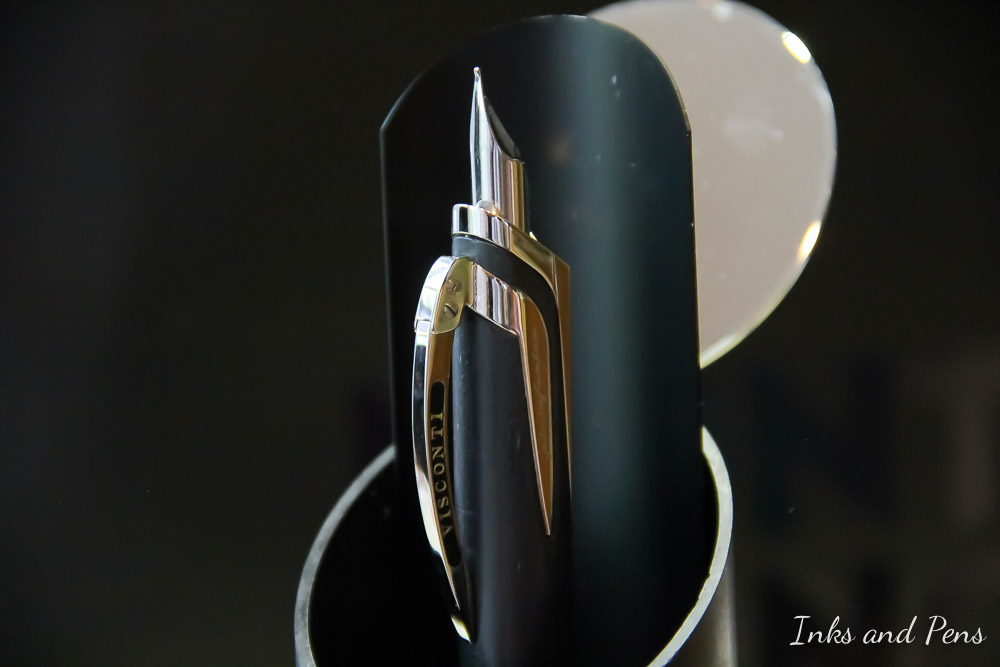 The barrel is medium sized and quite a good length. The length and girth is very comparable to the Pilot Vanishing Point if not a bit thinner. The only gripe I really have about the barrel design is the clip. Being a later Visconti, this pen features their bridge style clip, right where your fingers should grip the pen. This bridge clip is quite high and may cause some awkwardness in the grip, unlike the Vanishing Point with a thin and shallow clip. Other than that, I find the pen to be quite comfortable in the hand.

The nib of this pen is made of Chromium (first pen company to use it) and is slightly springy. I definitely would not attempt to flex it very hard as tubular nibs can be a bit of an issue with tines splaying and are very difficult to fix. The nib was quite smooth but had a little feedback. The tines appeared aligned straight from the box so there isn’t much to complain about there. The nib was wet like other Visconti nibs, but still quite controlled. Note that this nib does not have a breather hole. 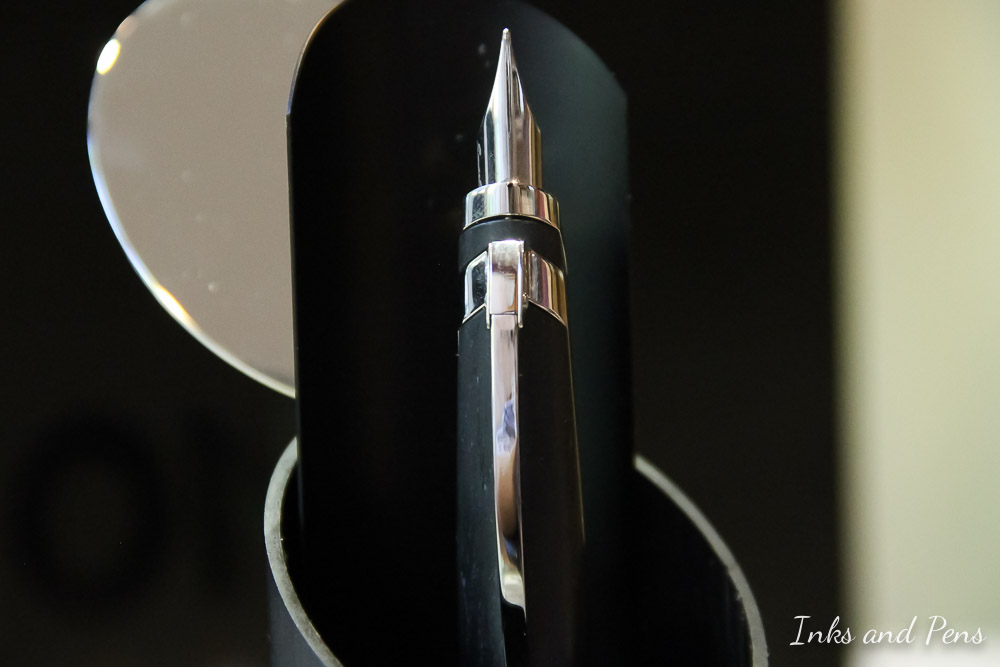 A small let-down in this pen is the filling system. This pen is limited to a standard international cartridge or converter. I can see why this might have been necessary due to design limitations, but I’m still a little bit bummed out about it. A piston filler would be much nicer. Luckily though, Visconti includes an extremely high quality metal converter which is exclusive to this pen. 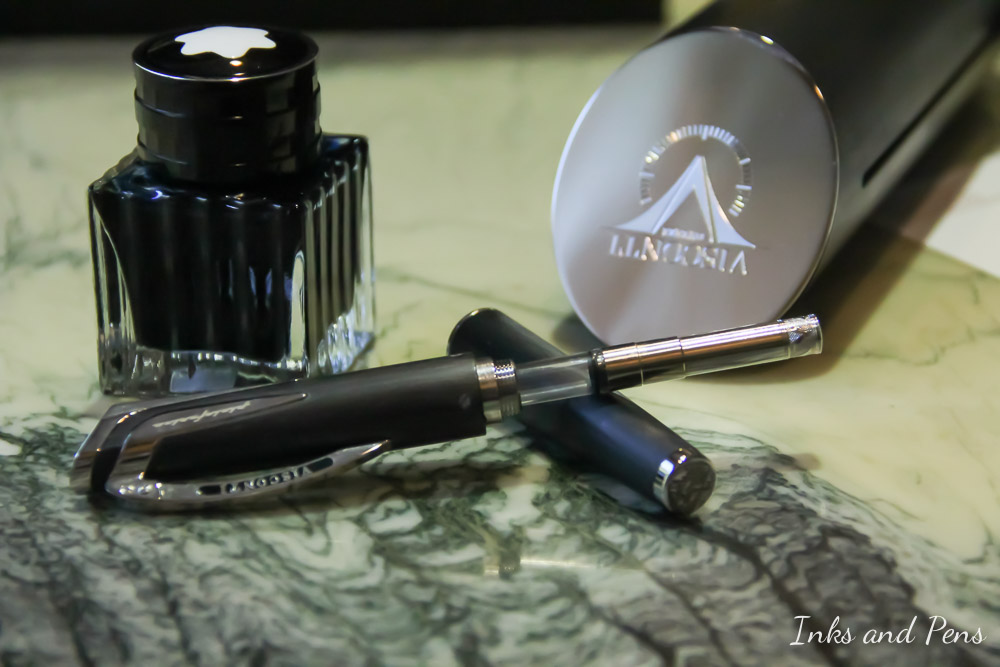 Visconti decided to include a special Mosquito filler for this pen. Unlike other Mosquito filling units, this one does not go directly onto the nib of the pen. Instead, you stick the end of the converter into the filler and fill from there. Again, this makes sense from a design perspective, but I feel that using a syringe to fill at this point makes more sense, considering you actually have to clean out the Mosquito filler with every use. 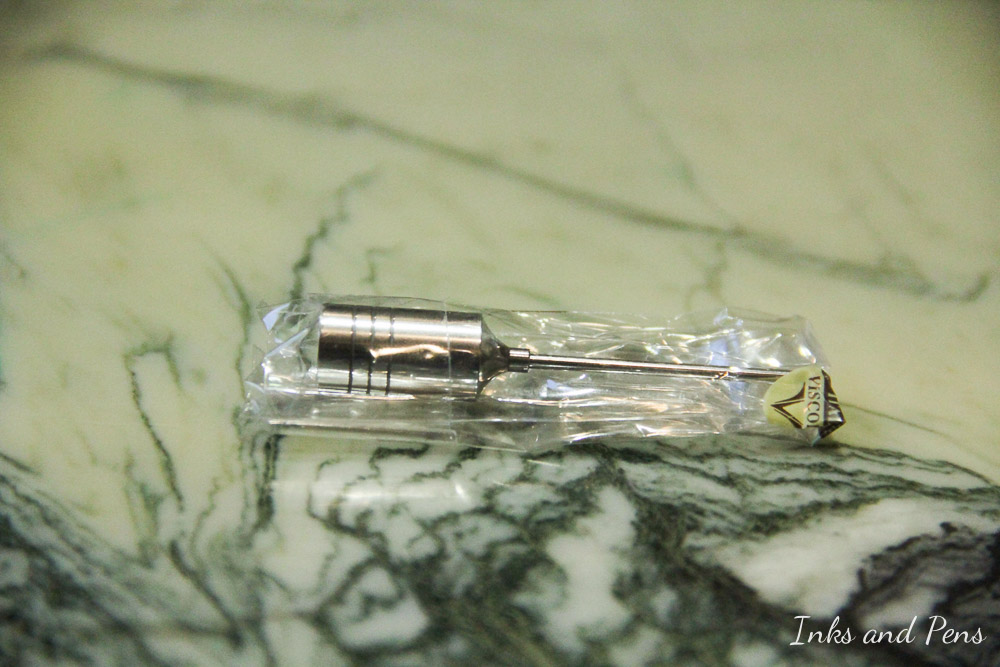 This unique pen can be found for $1895 at various online pen retailers and some brick-and-mortar stores. 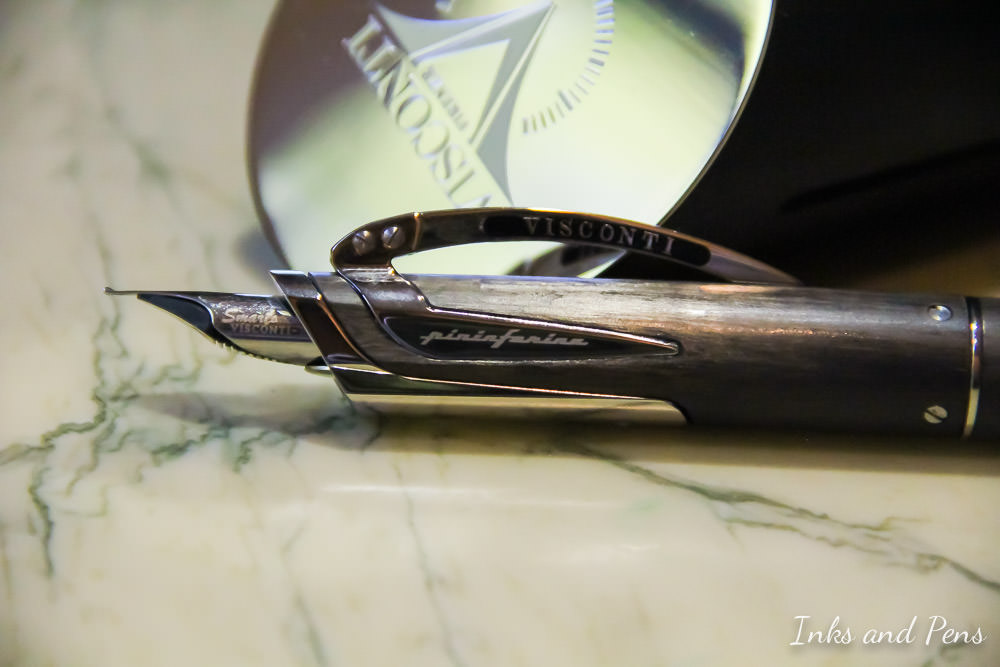 What do you guys think about the design of this pen? Do you think the clip will get in the way for you? Let me know below in the comments! Don’t be shy!