(This pen was loaned to me for review purposed by my good friend, Wendy. All the options provided below are mine only)

Everyone knows Montblanc, the famous luxury company based in Germany, obviously needs no introduction. Everywhere you turn in the fountain pen world, you’ll find a Montblanc pen of some shape or form. What may need some introduction is the Princess Grace of Monaco. Monaco is a tiny country located in the beautiful French Rivieras and has an area of only 0.76 square miles. Interestingly, it is also the second smallest countries in the world!

Despite its size, Monaco managed to attract the Academy Award-winning actress, Grace Kelly, from Hollywood’s old golden days. After she married Prince Rainier III, she became the Princess of Monaco. She is globally acclaimed as the epitome of style, charisma, and beauty, and Montblanc’s commemorative pen definitely embodies this. 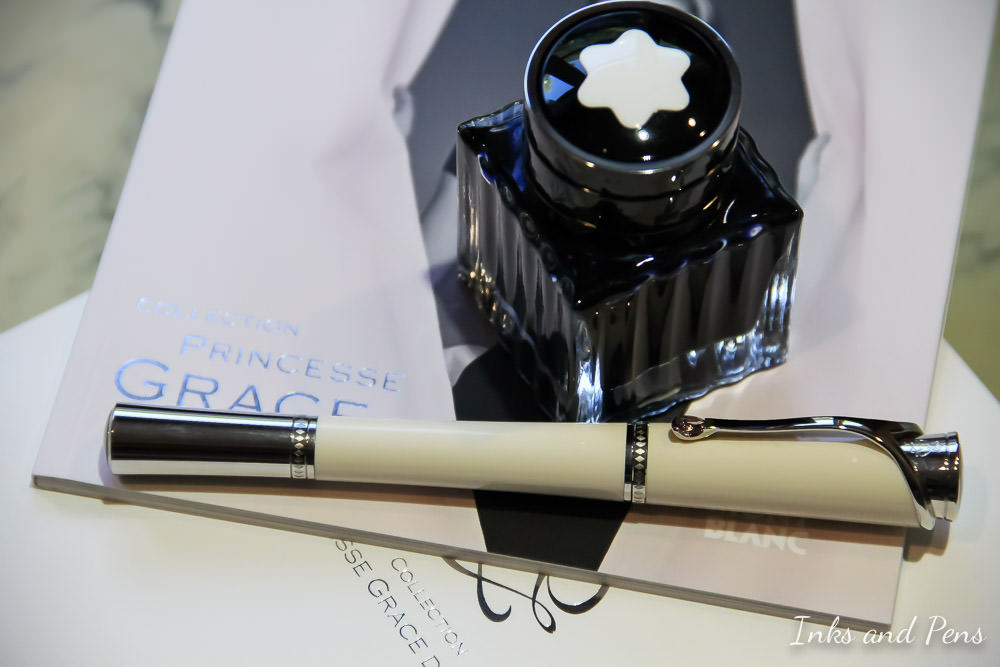 The pen comes packed in a large box bearing collection’s name. The box is quite substantial, but much smaller than Montblanc’s limited edition boxes. The box for the Ivory colored version is a bit boring, being just plain white, so it’s not much of a display piece. 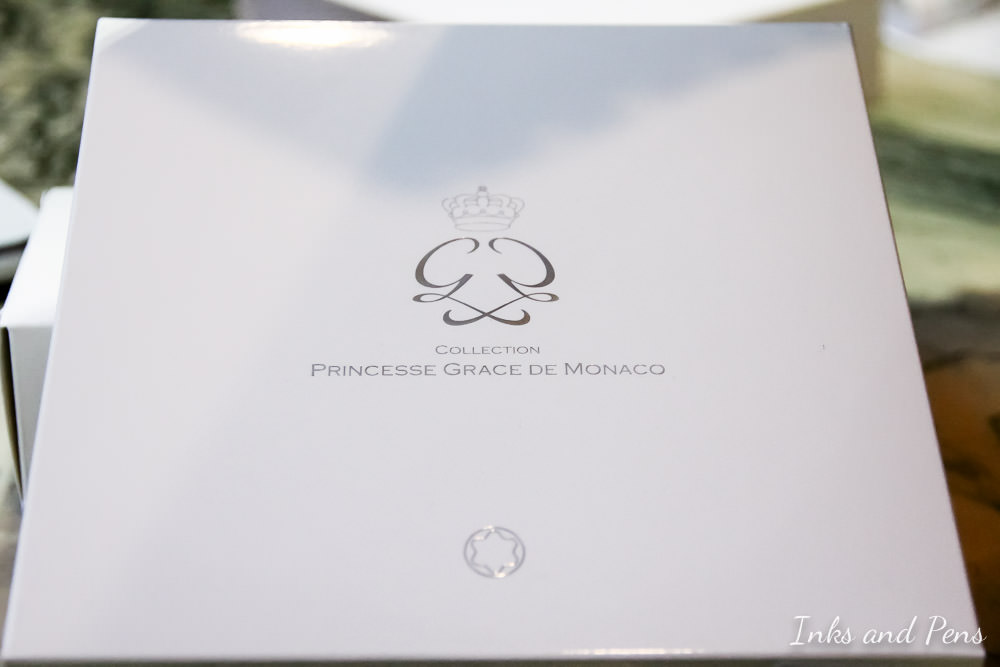 Upon opening the box, you immediately see the beautiful pen sitting in the felt lined interior. 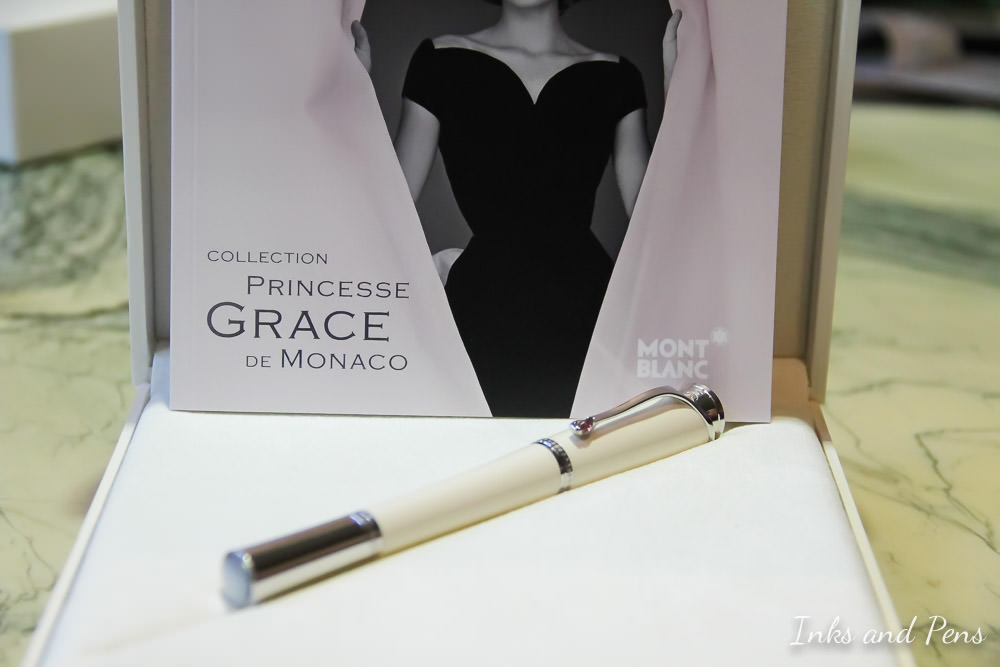 Also included is a large booklet with information about the collection, the Princess, and Montblanc. It also acts as the “warranty” for the pen, so take care not to lose the booklet if you ever need service. 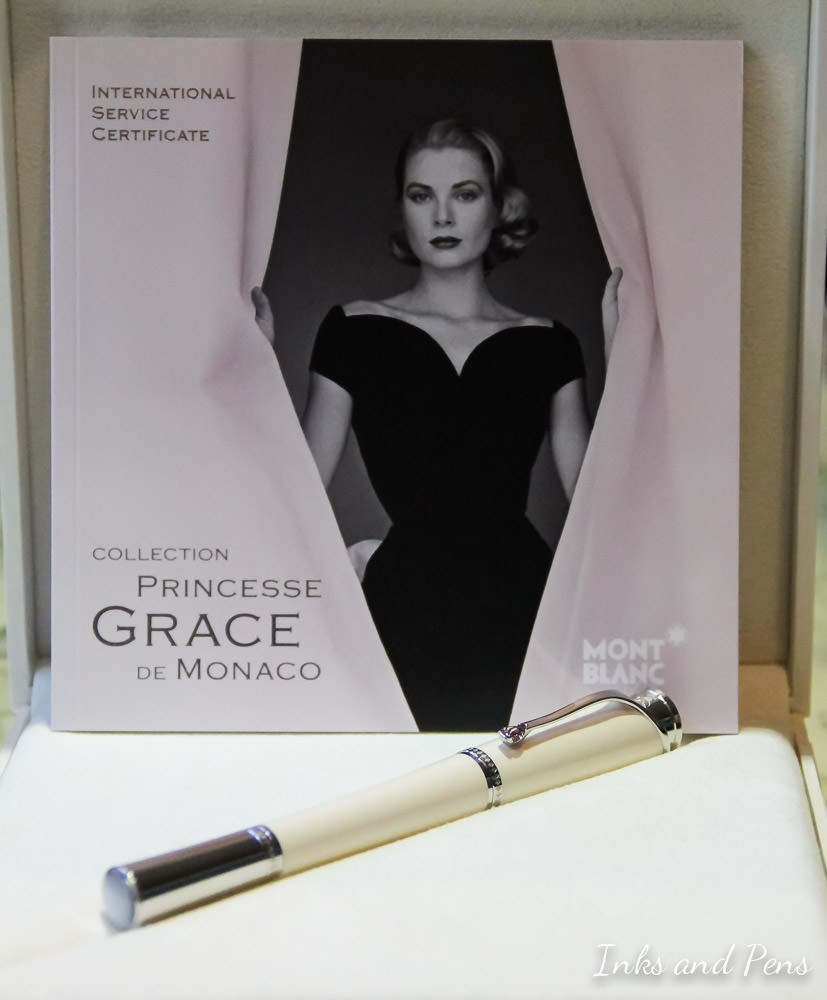 I feel like this is a good time to point out that this pen is known as a “Special Edition,” as opposed to a “Limited Edition.” Montblanc occasionally issues Special Edition pens which are produced only for a certain unspecified period of time. These pens are not limited to a certain number but will stop being produced eventually. No one really knows when Montblanc decides to end their collections, so it’s always a gamble when you wait.

Like other Montblanc pens, this one features the typical Montblanc “star” logo on the cap. The clip on the pen is wonderfully curved around the cap of the pen, then coming together at a final point. 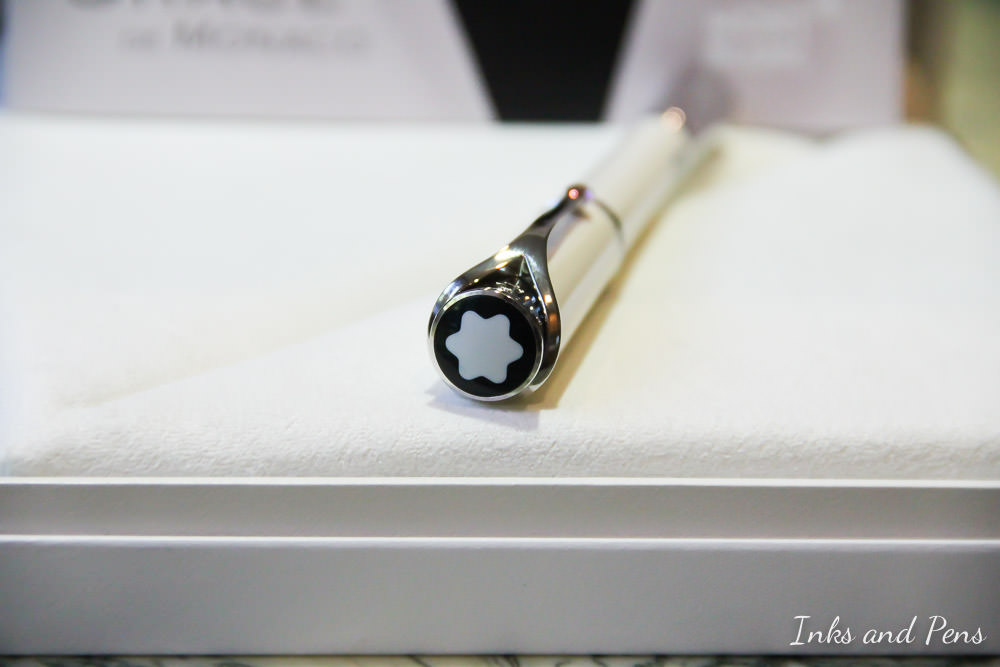 As well, the cap of the pen features a teardrop cut pink sapphire at the end of the clip, emulating the color of the Grace of Monaco’s rose. The shape of the clip resembles the V-shaped neckline of the Princess’s dress in a famous picture, shown on the cover of the booklet. 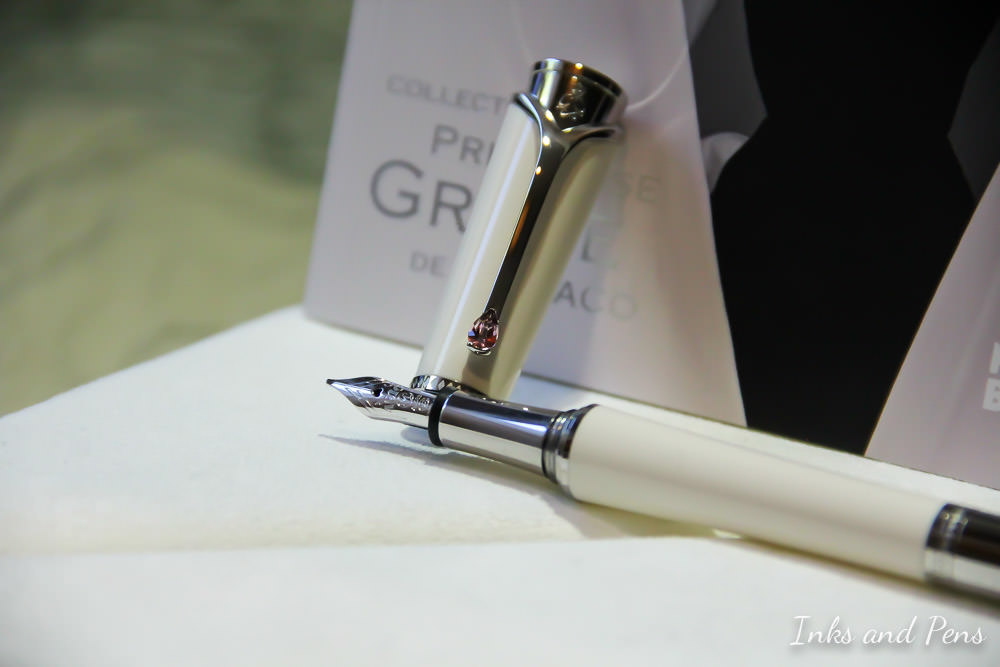 On the end of the pen is a lovely white opal cabochon, adding an interesting touch to the pen. 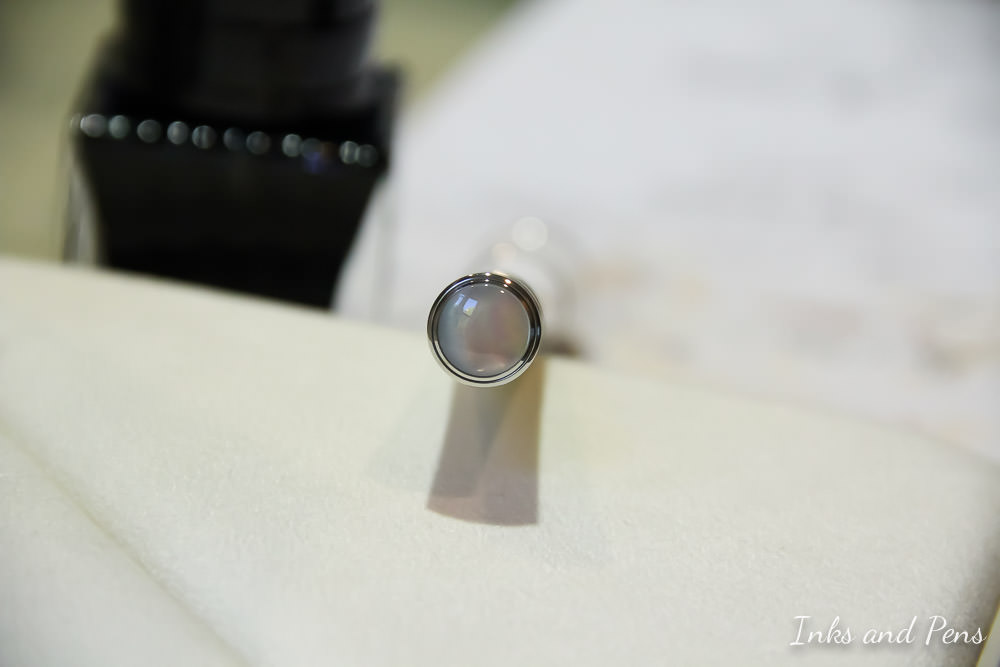 The pen’s filling system is a huge disappointment in my eyes. The pen will only take Montblanc short cartridges. Montblanc cartridges are very similar but fundamentally different from standard international ones. Thus, Montblanc carts can fit Standard Int’ pens, but not the other way around. This pen won’t even take any converters that I know of. I’ve tried a couple (Standard Int., Monteverde short, Jinhao) but none would fit.

To add insult to injury, Montblanc only includes a empty “demonstration” cartridge — not even a full cartridge. My local Montblanc boutique did give me a complimentary box of cartridges, so it wasn’t too bad. 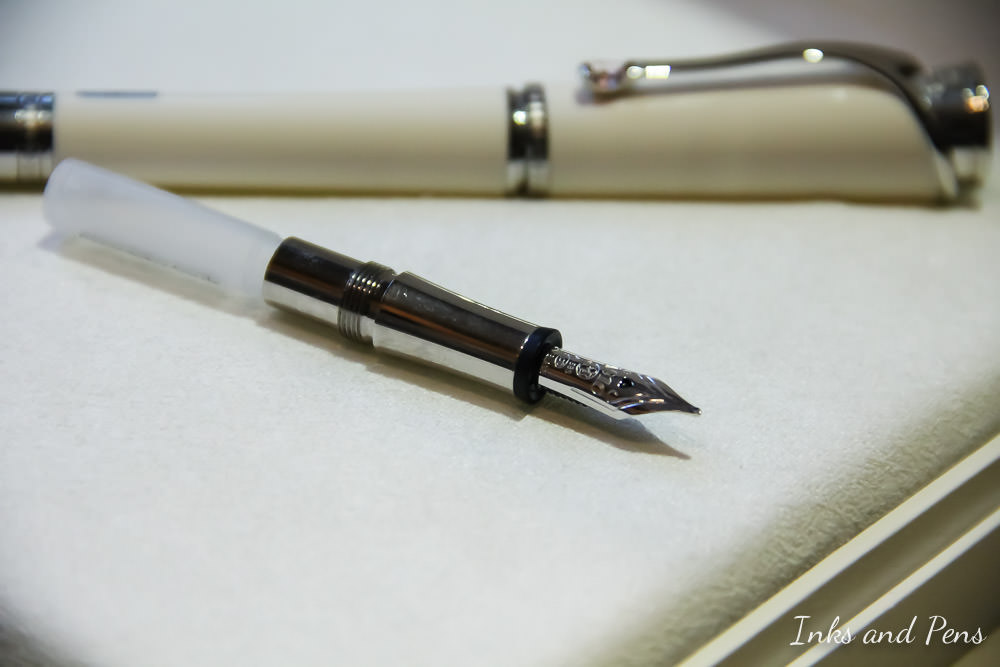 The nib that I got was smooth and wet. However, it was not very springy and I would not apply too much force to this nib, considering how small it is. The tines were very slightly misaligned but a quite push easily fixed the problem.

The pen retails for $1035 and can be found at numerous online retailers or your local official Montblanc boutique.