J. Herbin released their series of 1670’s Anniversary inks to commemorate “the rich life and adventures of J. Herbin, an enterprising French sailor of the mid-17th century. He made a number of voyages to India, collecting ingredients and formulas for his sealing wax and inks.”

J. Herbin released three inks in their line: Stormy Gray (A dark gray/black), Rouge Hematite (A red/brown), and Bleu Ocean (A blue). The inks are not limited edition as far as I know. Each of these J. Herbin inks contain a bunch of gold-colored sparkles in the bottle, which, once filled into a pen, give the ink an amazing sheen and sparkle.

Now, enough of an introduction of these inks! Onto the review! All these photos used were taken with an iPhone 6 and have been color corrected to the best of my ability. They mostly represent the true color of the ink, regardless of the lighting conditions. Find me on FPN as musicman123!

Here, we have the initial writing sample of the ink. The color is a bright red color, with a bit of a brown earthy tone to it. It is not too flashy, but also not too understated. It is good for grading papers and general letter writing.

This review was done with a Nemosine Singularity Demonstrator pen with fitted with a TWSBI Broad nib. The nib is tuned to be a bit wet and very smooth. 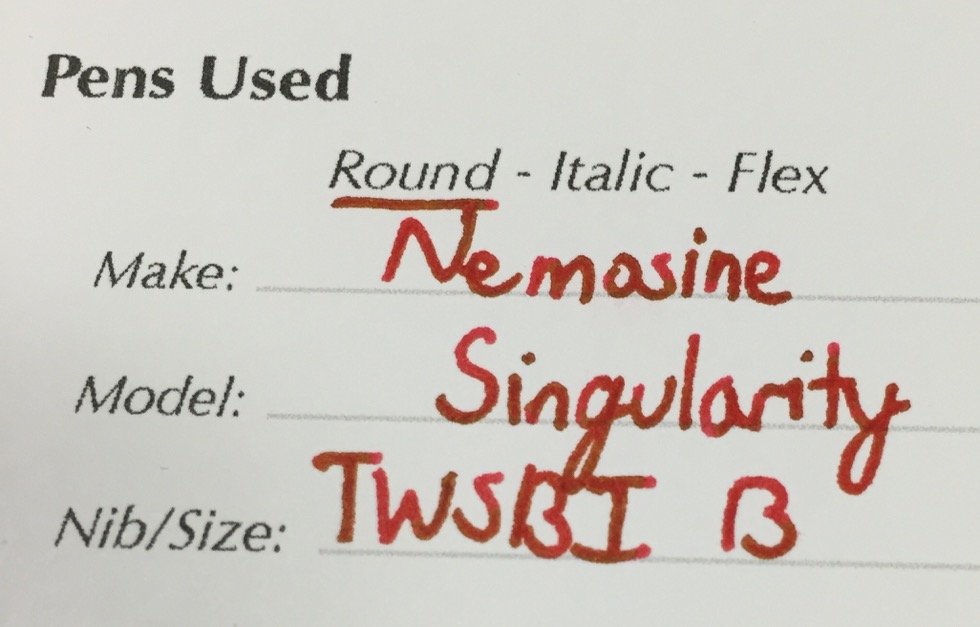 The paper used is standard HP 32lb Premium Laser Paper, found readily at Staples and Amazon. The paper takes ink just as well, if not better, than Rhodia and Clairefontaine. It is my go-to paper for all tasks. 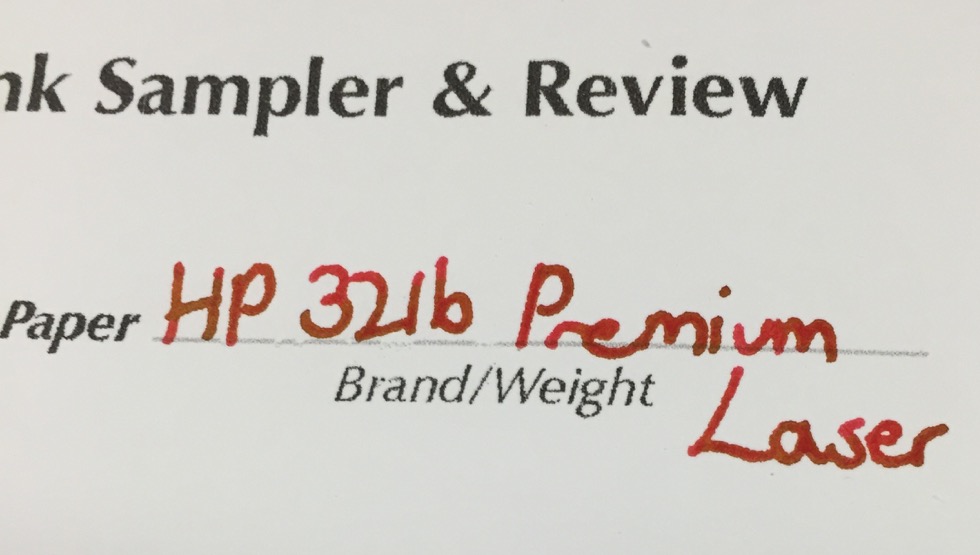 Here is a swab of the ink to get a look at the color of the ink in very wet conditions. Ignore the fingerprints!

The ink is very wet coming out of a B nib and shows the sheen very nicely. The ink provides a good amount of lubrication for the nib, which pretty much glided over the paper. There is some shading from a light to a medium hue, ignoring the sparkles. So far, there has been no spread, feathering, show through, or bleed through on this paper. Like stated, this ink has gold sparkles floating around. I invert the pen around a couple of times every 3 lines to get a good mix of the sparkles in the ink. Even with the sparkles, the ink cleans out easily under running water with no sparkles left after 15 seconds. No problems so far. 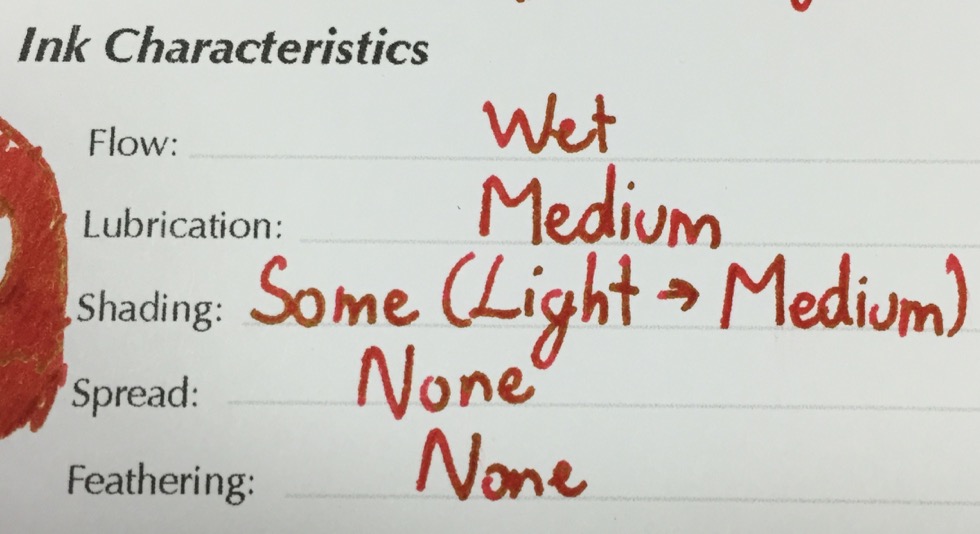 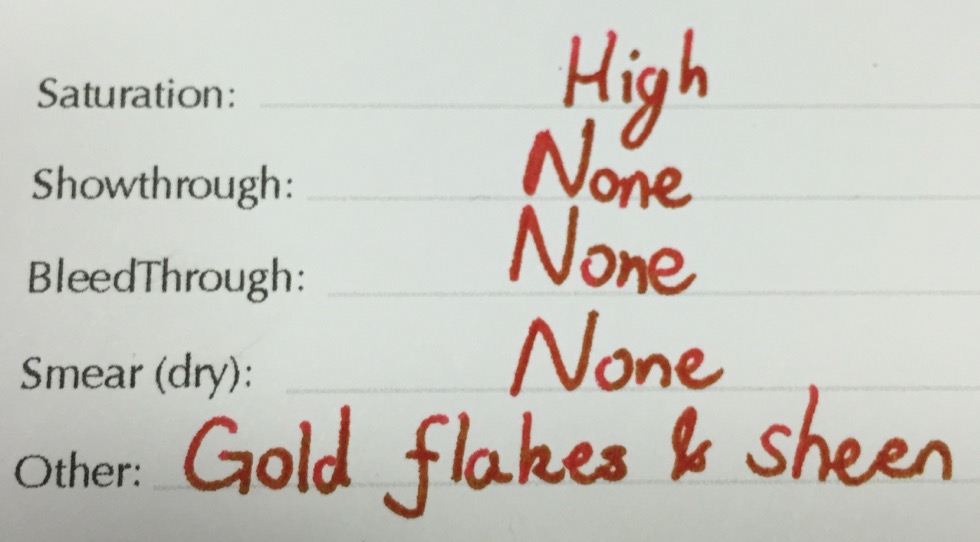 This ink takes a bit longer to dry than other inks, considering how wet it is. It takes about 22 seconds on this paper to dry completely without smearing. 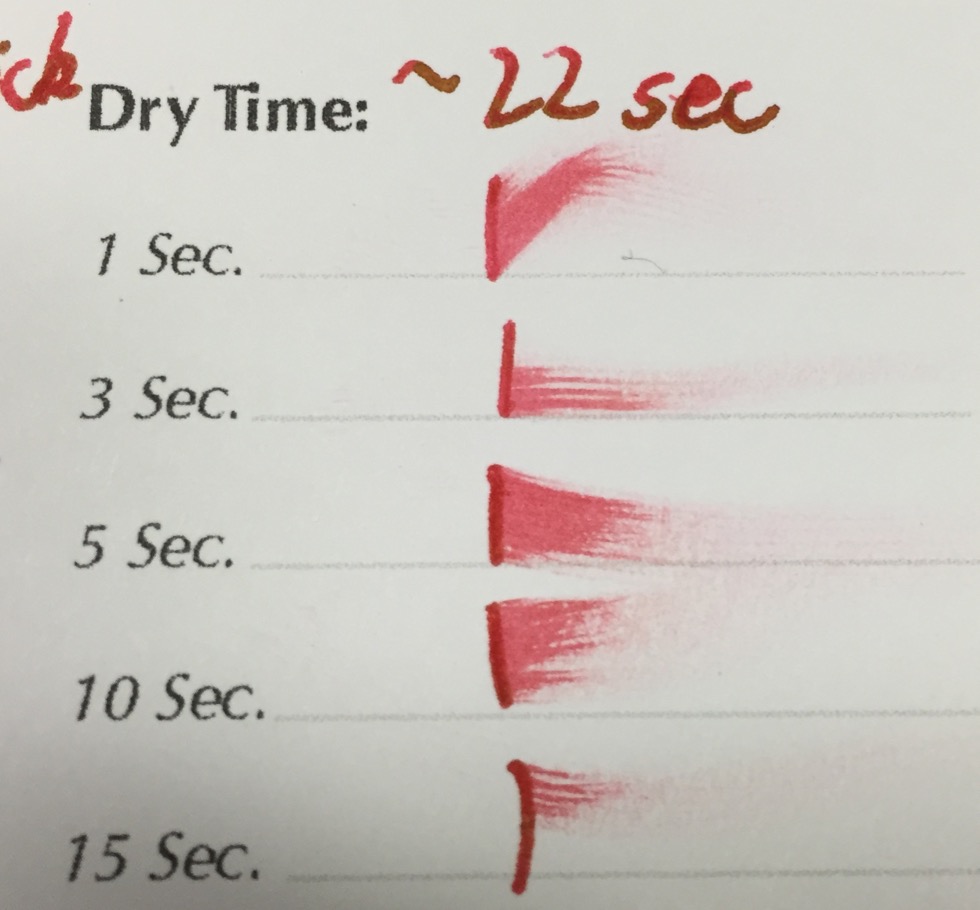 Here is a comparison of this ink with other ink colors around! The following is a list of the colors used from left to right. 1. J. Herbin Rouge Hematite (This ink) 2. Montblanc Corn Poppy Red 3. Diamine Oxblood 4. Diamine Red Dragon

Here is a water test. The top grid had drops of water placed for 10 seconds, then vigorously wiped downwards. The bottom text did not receive any drops of water and was only wiped with in the same motion as the grid. The ink was a complete disaster here! There was a LOT of lifting and a crazy amount of wet smear. I will never use this to address envelopes as it is a disaster waiting to happen. 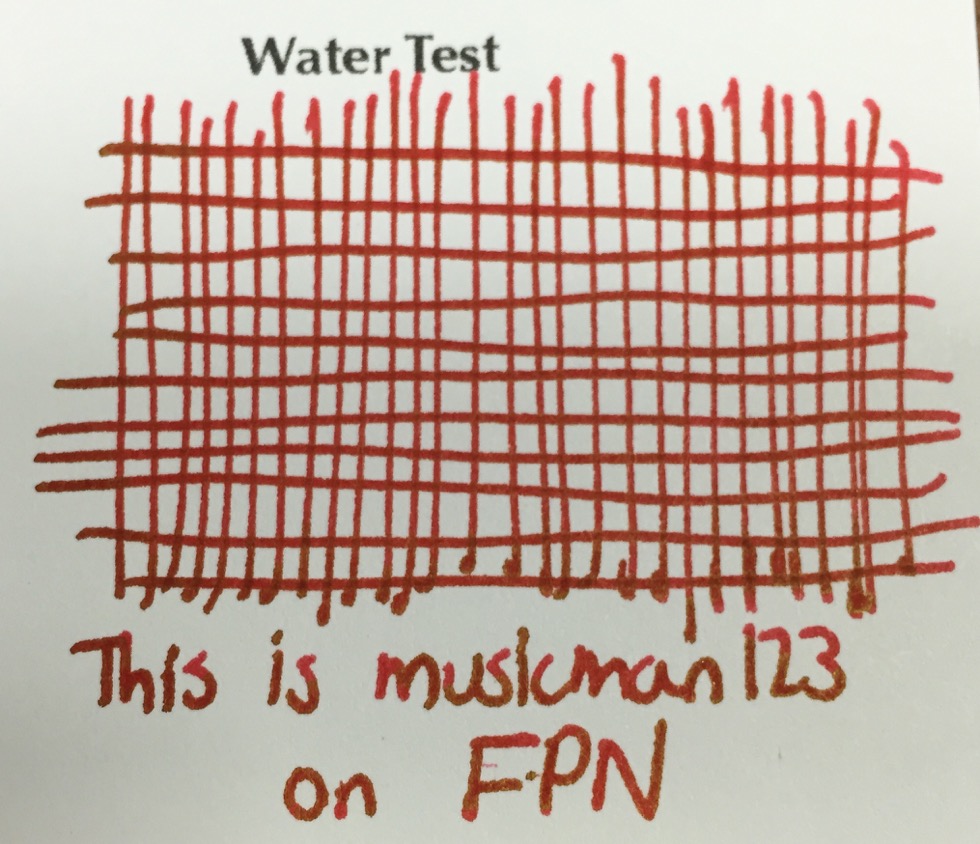 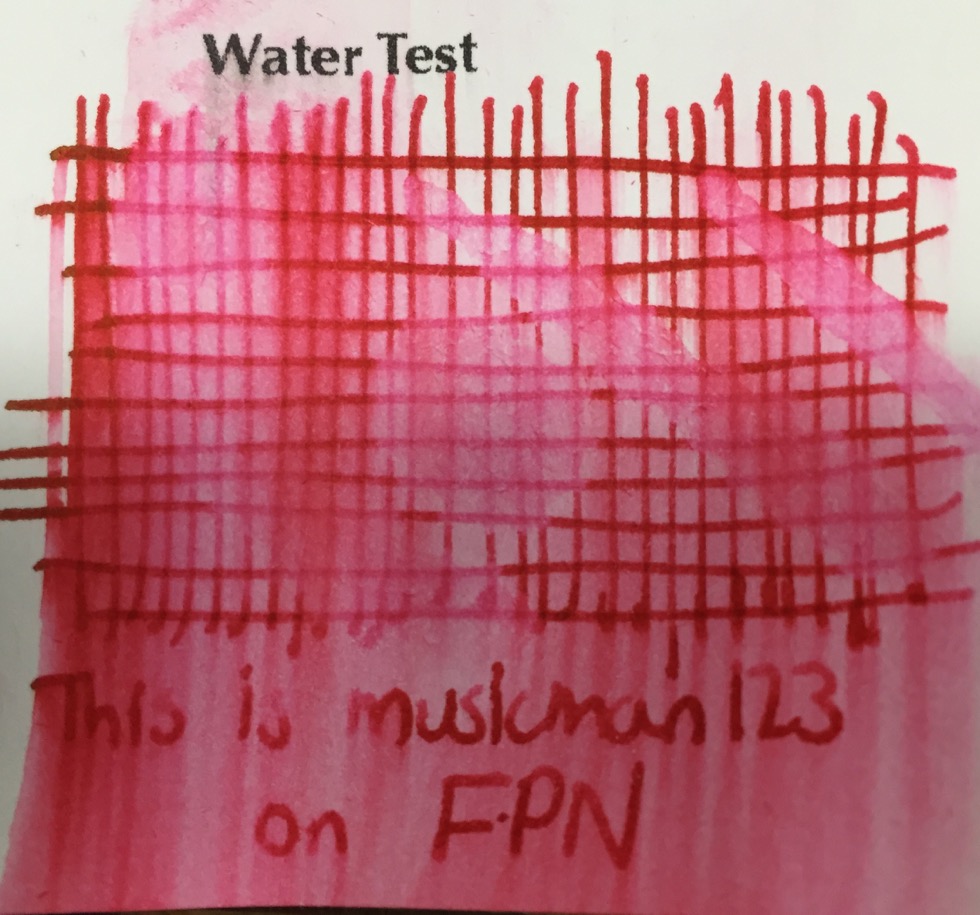 Lastly, here are some glamour shots of the ink! 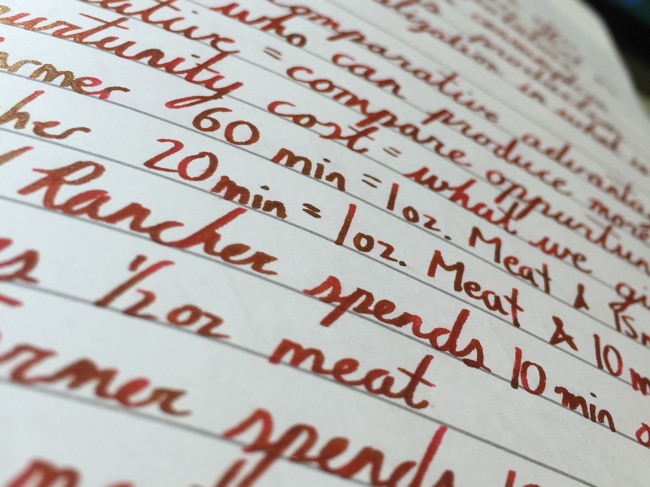 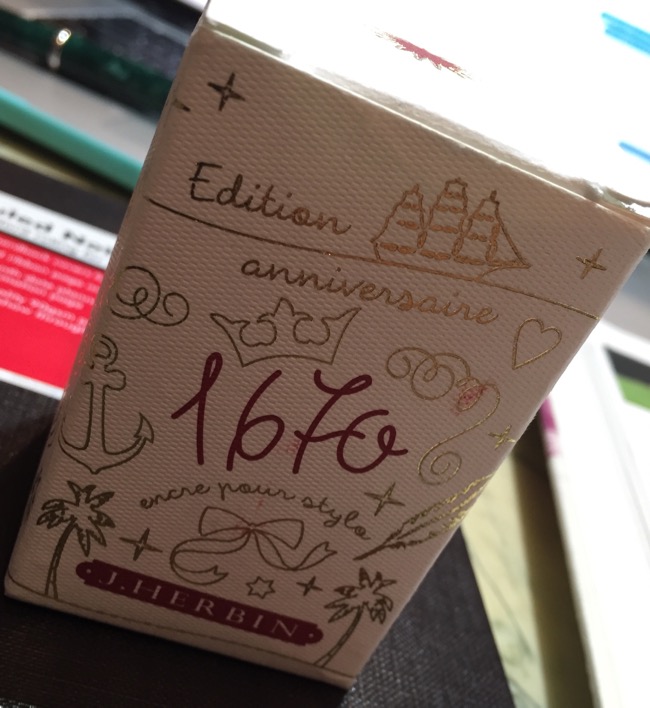 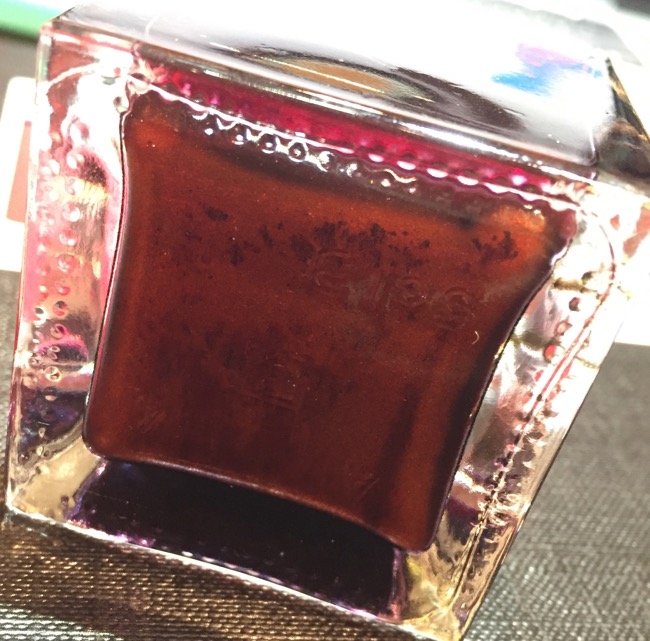 Also, before I go, here is J. Herbin’s own video of the ink! (Credits to J. Herbin)

Thanks for reading guys! Stay tuned for more reviews to come!